Judith Gonda talks about Murder in the Secret Maze 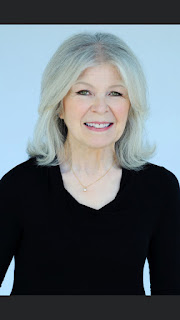 Judith Gonda is a mystery writer and a psychologist who grew up in Connecticut, London, England, and the San Francisco Bay Area. She was trained as a developmental psychologist at the University of Wisconsin-Madison and continued her education as a postdoctoral fellow at the University of Southern California where she also taught and worked as a research associate and met her husband, an architect and professor, there. They moved to Champaign-Urbana where she was an assistant professor at the University of Illinois. She moved back to LA to work as a jury consultant at a leading litigation consulting firm before opening her own jury consulting firm with a colleague. Her passion has always been figuring out what makes people tick, whether through conducting psychological research, applying psychology to legal issues, or examining motives and relationships in writing her mystery novels. She has two adult daughters, one a landscape architect and interior designer, and the other a screenwriter and producer, and two rescue Pomeranians, a.k.a. daughter surrogates, named Izzy and Ollie. All provide inspiration for her stories. She's represented by Dawn Dowdle, Blue Ridge Literary Agency.

1. Tell us about your life outside of writing. Thanks for having me on your blog, Diane! Outside of writing, I'm obsessed with rescue dogs. I have two rescue Pomeranians, who both turn eight this year. I got Izzy four years ago from a small rescue group who saved her from a Craig's List giveaway. Her owner had died and his family couldn't keep her. And, apparently, she never had a name before being rescued! Her owner just whistled to get her attention so the rescue named her Whistle. She's a wild child (I think she was kept outdoors mainly) and weighs in around nine pounds. Loves to chase squirrels. She is super loyal and a tad possessive if she thinks her mama's being at all threatened, i.e., when my husband dares to linger near my home office (aka the Pom lair) to ask me a question. I adopted my other little one, Ollie (she weighs five pounds), a year and a half ago. I found her through a different rescue organization that saved her from the shelter the day she was turned in. She had a bad case of kennel cough and a luxating patella but it was love at first sight. Both dogs were silent for about the first month or two we got them, but once they acclimated, they haven't kept quiet since. But despite their barking, they both are the sweetest and most easy-going little creatures ever!

2. Do you have a work in progress? Yes, I do. I'm working on the second book in the Tory Benning Mystery series featuring California landscape architect Tory Benning. The working title is MURDER IN THE CHRISTMAS TREE LOT. Tory is the president and principal designer at Benning Brothers, her family's landscape architecture firm and nursery. The holiday season is the nursery's most profitable time of year, in large part due to their popular Christmas tree lot, but when someone wearing a Santa Claus suit is the last person seen with a temperamental local food truck owner who then turns up dead in their Christmas tree lot, the consequences of being naughty or nice take on a whole new meaning, not only for the victim but for Tory's business.

3. What was the most difficult section/piece you ever wrote? What made it difficult? I always find writing a synopsis of a book challenging because it is so difficult to consolidate around three hundred pages into just two. It's the most difficult part of writing for me but probably the most valuable because it forces you to think through your plot. I write one version before I write the book for my agent and editor to approve. After I've finished all of the revisions on the book I update the original synopsis because even though I work with a loose outline, some of the plot details often change as the characters take on a mind of their own and steer the story off the original path a little bit.

4. What sort of research do you do for your work? I visit locations that have inspired my settings frequently and talk to people whose occupations appear in my books. I follow a lot of real crime stories in the news on various outlets, mainly online. I also pride myself on my Googling skills and, in fact, my main character, Tory Benning, also considers herself an excellent online researcher and it's one of the skills she uses to solve crimes. I'm trained as a research psychologist and I consider myself a thorough, persistent, and determined researcher of information related to all aspects of my stories. Even if I don't specifically use some of the information I find in the book, it still informs my stories and characters.

5. Which books and authors do you read for pleasure? Is there an author that inspires you? I adore Sue Grafton's books featuring Kinsey Milhone. I've started to reread the series. I love her dry humor. I'm also a fan of Janet Evanovich's Stephanie Plum for some of the same reasons. I'm inspired by Charles Dickens and J.K. Rowling because they both weave intricate stories with heart and humor that are also brilliant social commentaries.

6. Was there a person who encouraged you to write? Yes, as a matter of fact there is a specific incident when I lived in London and went to a very small private school for a while, kind of like a one-room school house. My teacher told me that it would be a crime if I didn't become a writer. I must have been around thirteen at the time. Decades later, ironically, I'm a crime writer.
Thanks again, Diane, for having me on your blog! 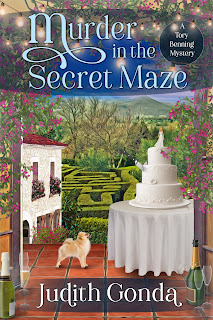 Murder Secret Maze
California landscape architect Tory Benning knows the lay of the land, but she'll have to dig through the clues to unearth a killer...
After a whirlwind romance and a glorious wedding at the luxurious Hotel Santa Sofia, Tory Benning is ready to let down her hair, slip into her dancing shoes, and celebrate---until she discovers that her newly minted husband has vanished. The police suspect cold feet and second thoughts are behind Milo's disappearance, but Tory's certain he's met with foul play. And since she designed the plush resort, she knows every nook and cranny of the grounds and adjoining secret maze, and wastes no time delving into her search.
As clues begin to emerge that Milo may have taken his last breath in the maze, Tory steps up her sleuthing, even as she learns she's the prime suspect of a cop with a chip on his shoulder and is squarely in the sights of a menacing stalker. And when a second body is found on the grounds, Tory fears she's up against a killer determined to silence any and all who get in the way.
Not to be deterred, Tory forges ahead, navigating a case with more twists and turns than the maze itself, until the labyrinth of clues leads her to shocking revelations about her husband, her family, and the identity of a killer who's dead set on making her the next victim...
Book buy link: https://www.amazon.com/Murder-Secret-Maze-Benning-Mystery/dp/1950461386/ref=sr_1_1?keywords=judith+Gonda&qid=1581377809&s=books&sr=1-1