Joseph Badal tells us about Payback and Justice

REVIEW: The Motive (The Curtis Chronicles,#1)
When Joseph sent me The Motive, I wasn't sure what I was getting into! This novel is definitely a wild ride with some great twists. Not for the faint of heart, there are several explicit and graphic scenes that made me cringe due to their stark realism. That said, I'm looking forward to reading more of is books when I get the chance.
Enjoy finding out more about this #1 Best-Selling Author!!

Joseph Badal is the author of 16 award-winning suspense novels, including Payback, which was released on May 12. He has written four stand-alone novels and twelve books comprising three series: the Danforth Saga, the Lassiter/Martinez Case Files, and the Curtis Chronicles. He is an Amazon and Barnes & Noble Best-Selling Author, a two-time winner of the Tony Hillerman Prize, a three-time Military Writers Society of America Gold Medal Winner, an Eric Hoffer Prize Winner, and a two-time “Finalist” in the International Book Awards competition.
Joe is a frequent speaker at writer, civic, and business conferences, and has taught several master classes in writing.
Prior to his literary career, he served six years in the U.S. Army, including tours of duty in Vietnam and Greece, from which he received numerous decorations.
After his military service, he worked for thirty-six years in the banking & finance industries and was a founding director and senior executive of a New York Stock Exchange-listed company for sixteen years.
Joe is a member of International Thrillers Writers, Sisters in Crime, Croak & Dagger, Military Writers Society of America, Public Safety Writers Association, and Southwest Writers Workshop.

What would you say are your strengths as an author?
I want my readers to experience roller coaster-like tension throughout my books. I try to deliver brief moments of calm sandwiched between suspense and action that keeps the reader hooked and wanting more. My plots are advanced on the foundations of strong, well-developed characters to whom the reader can relate, rather than being super heroes who leap tall buildings in a single bound.

How often do you write, and do you write using a strict routine?
I approach writing as a profession, not a hobby. Just like going to work every day at an office, I write every day. I aspire to hone my craft through commitment to it. This translates to writing for at least four hours a day, six days a week. I should clarify that when I refer to "writing," I include research, editing, and drafting under that definition. I also spend at least two hours per day on marketing and promoting my work.

Five years from now, where do you see yourself as a writer?
Where I see myself and where I hope to be are two different things. I am confident that I will have had 20 books published by 2025, which works out to be one book a year since my first book was published in 2003. It would be gratifying if my readership will have doubled in that time. As to what I hope happens in the next five years, I would be thrilled if one or more of my novels is the basis for a movie and/or television series.

If you could offer one piece of advice to a novice writer, what would it be?
I have been asked this question many times over the years and my answer has never changed. Never, ever fall in love with your storyline to the point that you cannot see its flaws. It's not enough to write a good story. Your work must be "mechanically" solid. You must edit your work over and over until it is as clean as you can possibly make it. Then, have it edited by a professional editor who has one goal in mind: to make you the best writer you can be. Do not hire an editor who is concerned about your thin skin. Find one who will be critical and will explain why he/she recommended changes.

What would you consider to be the best compliment a reader could give your book?
There are many ways that a reader compliments me and my work. Just buying a copy of one of my books is a wonderful compliment. Of course, writing a good review is also gratifying. But nothing gives me more pleasure than when readers tell me they could not put my book down.

What are you working on now?
I just finished Payback, a standalone thriller released by Suspense Publishing on May 12. The Carnevale Conspiracy, the 7th book in my Danforth Saga, has been submitted for editorial review by the publisher. I am currently in final edit of Everything to Lose, the 4th book in my Lassiter/Martinez Case Files series. This series features two female homicide detectives who investigate dangerous, often diabolical cases while dealing with personal issues that would defeat most people. 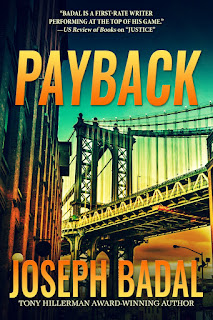 When Bruno Pedace learns that his investment banking partners are setting him up to take the fall for their own corrupt practices, he does what he has always done—run away. But the documents he takes with him put a target on his back. He changes his name and, for nine years, goes underground, until an assassin tracks him down in California and badly injures him.
Befriended by Janet Jenkins, a courageous woman who works in a battered women’s shelter, Bruno, for the first time in his life, with Janet’s help, fights back. He constructs an ingenious financial scheme to get payback for the crimes perpetrated by his former partners.In PAYBACK, award-winning, Amazon #1 best-selling author Joseph Badal weaves a story about a sympathetic protagonist who, when pushed too far, finally pushes back. This is a story about revenge that includes assassins, corrupt Wall Street investment bankers, a Mafia capo, Asian gangs, and heroic cops. And, to top it all off, it is a story about friendship and love. 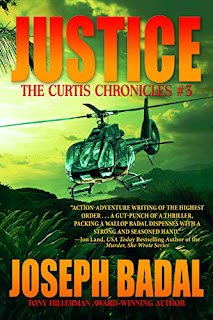 Amazon #1 Best-selling author, Joseph Badal, delivers “Justice,” the third in his Curtis Chronicles series, with the same relentless tension that is a trademark of his award-winning suspense novels.In “Justice,” Matt and Renee Curtis return, along with their maniacal tormentor, Lonnie Jackson. On a trip to Costa Rica with their friends Esteban and Alani Maldonado, Matt and Renee believe they are beyond Jackson’s reach. They soon find out how wrong they are, however, when Jackson orchestrates the kidnapping of Renee and Alani and transports them to his human trafficking headquarters located in Nicaragua.Matt and Esteban recruit former special operations soldiers living in Costa Rica to help them rescue their wives, sending readers on an action-packed journey.As with all of Badal’s novels, “Justice” is a bold and complex thriller. It weaves an intricate plot involving multiple international locations, a human trafficking organization, the CIA, Special Operations, corrupt politicians, Bulgarian organized crime figures, Swiss bankers, and a compelling cast of engaging, inspiring, and diabolical characters.The Curtis Chronicles is an epic series that delves into the age-old conflict between good and pure evil, where each book leaves you begging for more.

"Another thrill ride by acclaimed suspense author Joseph Badal. It's relentless from start to finish. Badal just gets better and better."--David Morrell, New York Times Bestselling Author of "Murder As a Fine Art"

"'Natural Causes' by Joseph Badal is a first-rate thriller, a powerhouse of a story that will keep you turning the pages into the wee hours. The pacing is relentless, with a sense of menace that grows almost unbearable. Lassiter and Martinez are two homicide detectives for the ages. I loved it!"--Douglas Preston, #1 Bestselling Coauthor of the Famed Pendergast Series 5