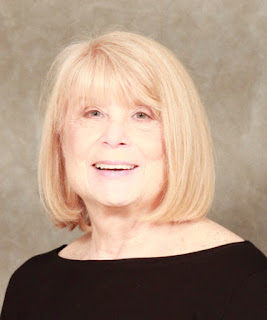 Jane Kelly is a native of Philadelphia close to the Jersey Shore settings of the Meg Daniels mysteries from Plexus Publishing. She is also the author of the Widow Lady Mysteries and the Writing in Time Mysteries available via Amazon. Jane has an MS from Drexel University in Library and Information Science and an MPhil in Popular Literature from Trinity College, Dublin which she earned as a very mature student in 2008. Jane has served as President of the Delaware Valley Sisters in Crime and on the board of the New York Chapter of Mystery Writers of America. Her fifth Meg Daniels mystery, Greetings from Ventnor City, was published in January 2020. The fourth, Missing You in Atlantic City, won an Independent Publisher Book Award silver medal for mid-Atlantic fiction.

Given the pandemic, I have no idea what my new life outside of writing will be. I had just left my part-time job to get in better shape. I started singing in a choir and teaching English as a Second Language. Then, the pandemic hit. ESL is moving to Zoom but I don’t have the voice for a Zoom choir. I love to travel and had a list of places to go, but now all my plans are on hold. I am playing things by ear. And, about getting in better shape? How about a different shape? I gained nine pounds.

I started a book that turned too dark for my humorous heroine. I liked the story, so I took Meg out and saved the plot for future use. It took me a few false starts to decide on a mystery for Meg to solve. She is now investigating a missing person from the disco era. Spoiler alert: she’ll solve it. I am not quite sure how yet, but she will. I am a pantser.

I enjoy the writing process. I never find it difficult but I always find it challenging. My books have a humorous touch and often the first draft will strike me as a bit dull. I try to put myself into the scene with the characters and watch them react to each other. That also is a way of checking that they don’t sit down twice before they get up once. Keeping an eye on logistics is a huge challenge for me.

hat sort of research do you do for your work?

My current day amateur sleuth researches incidents related to past events. Most recently, her investigations involved the 1964 Democratic Convention and the 1968 Miss America protests, both in Atlantic City. I loved doing the research.

My biggest problem when it comes to research is stopping. To me there are two aspects: 1) basic research, where I gather broad background for the topic or the era, and, 2) defensive research, where I search for that one misstatement, literally one word, that can pull a reader out of a story. And, it only takes one word to do that. Missing You in Atlantic City includes accounts from witnesses to a 1964 crime told from their point of view at the time of the crime. On the last read-through, I noticed that a character had observed of the victim that “she kept her cool.” It struck me that not in 1964, she didn’t. She could keep a cool head, maintain a cool demeanor or display a cool manner, but she could not keep her cool until at least 1967. I used one of my favorite tools to check: Google Ngrams. That is all I’m going to say because when I get started talking about Google Ngrams I have a real problem stopping.

I try to read all the books written by my Delaware Valley Sisters in Crime and authors I meet at the New York Chapter of MWA. The titles run the gamut from political thrillers to cozies. I might have one in hand, one on Kindle and one on audio. Still, I am hopelessly behind. I tend to read a lot of non-fiction. I have been reading history backward and have gotten to the 1930s. There is so much to read that I can’t get past that era. I need to make a change so I can devote a couple of hours on my daily schedule to reading.

Many people throughout the years have been supportive but, oddly enough, I do not recall the name of the most encouraging. I had gone to lunch with coworkers and one brought along a friend I had never met. Midway through the meal, the woman turned to me and asked, “Are you a writer?” I had never published anything, so I answered, “No.” She replied, “You should be.” Why would I value advice from a total stranger? I think because she was a total stranger. That afternoon, I started to take writing seriously. 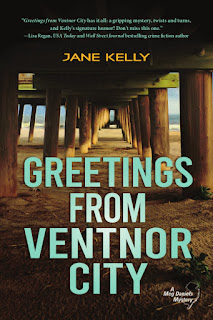 With a newly-earned reputation for finding lost people and a newly-acquired sidekick to help her, Meg Daniels, amateur sleuth, sets out to discover why a 19-year-old coed disappeared after protesting at the Miss America Pageant in 1968. Did the rebellious teenager get swept up in the counterculture or did someone want her out of the way... permanently? Meg won’t stop until she finds the answer.

"Greetings From Ventnor City has it all: a gripping mystery, twists and turns, and Kelly’s signature humor! Don’t miss this one."   —Lisa Regan, USA Today and Wall Street Journal Bestselling Crime Fiction Author’’