August 24, 2013
OH NO!! Thanks to the wonders of technology, this post was supposed to air yesterday! Apparently, it didn't work and I'll never try that again! So sorry to those people who were depending on me to be part of the link!!

Through my new friend Ginger Simpson, a fellow writer with Books We Love, I was introduced to this fun, monthly event called Robin's Round Robin Blog hosted by Robin Courtright. Basically, several various writers answer one question on their blog and provide a link to the next writer's blog so readers can follow along. Kind of like a writer's version of tag without having to get out of our creaky chairs!

Have you ever met a real-life character? Someone who was very different
from your preconceptions, or someone who was just bigger than life, or
whose lifestyle was so very different? A very eccentric someone? Tell
about them (without giving real identities) in any manner you like. Did
they change your viewpoint? Did you use them as a fictional character?

I have met a few great characters in the various jobs I've held. One of the best I've met so far was a customer in a bank. The perfect cliché for a blue eye-shadow wearing, toy dog packing, big haired, over the top character who actually talked about having to get her corns and bunions treated. OMG!! While I didn't use her per se, I have another character who could be her later in life named Mimsy Lexington who appears in my novel The Bookstore Lady! Mimsy is an 80 year romance novelist who gets around with a walker and wears ball gowns, tiaras, and plastic stilettos - the kind strippers wear. She not only appears in The Bookstore Lady, the first book in the Wild Blue Mysteries series, she also has a cameo in the second book in the series, The Mystery Lady, and will be featured in the third book called The Crazy Lady. 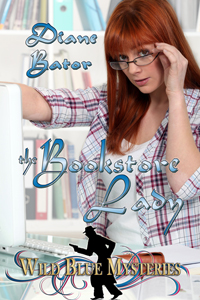 Thanks for stopping by, come back and visit soon!
And now off to the talented Rita Karnopp for her response!
Ginger Simpson Rita Karnopp Robin Courtright The Bookstore Lady The Crazy Lady The Mystery Lady Wild Blue Mysteries