Showing posts from October, 2021
Show all 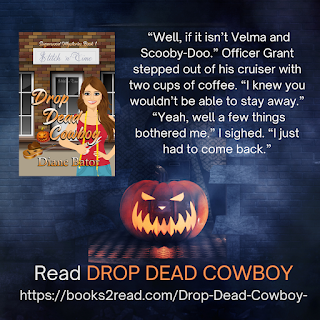 HAPPY HALLOWEEN!! While I'm in the middle of moving to a new home this Halloween, I thought I'd leave a little entertainment for you all! Something I worked on last November for Nanowrimo (National Novel Writing Month) that will be published one day soon! This is an excerpt from The Spirited Witch , a YA fantasy that I hope to self-publish in 2022! Please keep in mind, it has not reached the editing phase so it is a bit rough in spots. Enjoy!   The Spirited Witch   Aura trailed her hand along the cream wallpaper patterned with black velvet swirls. The texture comforted her. In fact, she’d already worn a small line in the velvet over the past ten years she’d lived here. It was only a few months now before she was actually an adult. Most kids her age would go to college. Aura would be able to start her training to become a real witch. As far as she was concerned, her birthday couldn’t come fast enough. Below her, a small crowd of people wearing drab fall colours had gathere
Post a Comment
Read more

A Chat with Patricia Miller-Schroeder about Sisters of the Wolf

Welcome to Canadian children's author, Patricia Miller-Schroeder! Pat Miller-Schroeder is an active member of the Saskatchewan writing community and has written 17 children’s non-fiction books about nature, science, and the environment. Two of her books, Bottlenose Dolphins and Japanese Macaques were nominated in the Children's Literature category of the Saskatchewan Book Awards and another called Blue Whales was nominated for the Hackmatack Children's Choice Award in the Maritimes. Her book Gorillas received the Canadian Children's Book Centre Choice Award.   Pat has also written several children’s educational film and television scripts. She was the main researcher and co-writer on ten episodes of a wildlife biography series called Wild Lives broadcast on both SCN and the Discovery Network. She also developed the characters and wrote the animated educational film script, Hot Stuff the Fire Cat , for the Saskatchewan Professional Fire Fighters Association
Post a Comment
Read more

Donna Conrad releases her memoir, House of the Moon; Surviving the Sixties

House of the Moon By: Donna D Conrad Covina, California, in the 1960s is a clean, white place to live just twenty-four miles east of Los Angeles. The maze of three-bedroom, two-bath housing tracts is the perfect place for a respectable undercover agent for the State, his wife, teenage son, and two daughters. But beneath the veneer of normalcy lies the truth of a violent, psychopathic father, an alcoholic wife, their pacifist son who is sent to war, and their two daughters—prime candidates for a cultural revolution that is gathering recruits with every toke.   House of the Moon is a haunting and ultimately triumphant memoir about coming of age during the decade that changed the world. With an unflinching voice, Donna Conrad chronicles her teenage years through lyrical vignettes. From encounters with Jim Morrison, Jimi Hendrix, and other legends of rock ‘n roll, to loaded shotguns at home, sexual violence in the streets, and flying high on drugs just to get by—this fast-paced mem
Post a Comment
Read more

Blood Mark By JP McLean What if your lifelong curse is the only thing keeping you alive?   Abandoned at birth, life has always been a battle for Jane Walker. She and her best friend, Sadie, spent years fighting to survive Vancouver’s cutthroat underbelly. That would have been tough enough without Jane’s mysterious afflictions: an intricate pattern of blood-red birthmarks that snake around her body and vivid, heart-wrenching nightmares that feel so real she wakes up screaming.   After she meets the first man who isn’t repulsed by her birthmarks, Jane thinks she might finally have a chance at happiness. Her belief seems confirmed as the birthmarks she’s spent her life so ashamed of magically begin to disappear. Yet, the quicker her scarlet marks vanish, the more lucid and disturbing Jane’s nightmares become—until it’s impossible to discern her dreams from reality, and Jane comes to a horrifying realization:   The nightmares that have plagued her since childhood are actually vis
Post a Comment
Read more

Shooting Star By: Sasscer Hill When Nikki’s ex-lover Will hires her to protect the horses used to film a movie at Santa Anita Racetrack, she learns evil is alive and well in Hollywood. Keeping Thoroughbreds safe from a director who doesn’t know a horse from a hamster is tricky. More difficult are the unresolved feelings between her and Will, especially when sexy, young movie star, Jamie Jackson, sets his sights on Nikki. But when a sniper’s bullet shatters the brain of a cameraman close enough that she can smell his blood, Nikki’s need to protect the film crew overrides everything. Her sleuthing unearths a trail of corruption and when she must lie to Will to protect his life, she’s on her own. Can she identify the evil behind the scenes before she and Will become the next victims? Shooting Star is the fifth rocket-paced story in the award-winning Nikki Latrelle mystery series. If you like protagonists with heart and courage, unexpected twists, and a thrill ride to the finish,
Post a Comment
Read more

The Secrets here in Verdant Glen are expected, they come along with the deeds. Lisette and Natalia are perfect. What all the other girls want to be. Beautiful and famous as their alter egos online, they revel in the joy of sexual exploration, and exhibitionism online. The views, the likes, the followers. It's addictive. Almost as addictive as the forbidden fruit of their new teacher, John May. With a dark past of his own, he sees Lisette for exactly what she is. Both tempting, and troubled. Will he surprise her, or will it be the other way around? Dealing with divorce and death at a young age, Lisette only has Natalia. And with her mother slowly drinking her way to the grave, Natalia only has Lisette. But when John shows Lisette how toxic their relationship truly is, will she believe him? Will he change her life if she chooses John over Natalia, or will he destroy it? Once the dust settles only one of the two girls will make it out alive. The other will have their life
Post a Comment
Read more

The Serenity Falls Complete Series   A Top 100 Amazon Book from Romance Writer Sophie Mays   Released by Love Light Publishing, t his collection is available in paperback and eBook! Brisk mountain air and romance abound at the Wyatt Ranch! From bestselling author Sophie Mays comes this delightfully heartwarming sweet ranch romance series.   Whether you are falling in love alongside a baker, an artist, an ex-Navy Seal, or a world traveler - there's something for everyone in Serenity Falls. Set against a gorgeous small-town mountain backdrop in Colorado, we follow five siblings as they each return home to help start a new family business.    From cowboys to unexpected newcomers, from weddings to high-stakes adventures , you will fall in love with this cozy small town in the Rocky Mountains and become friends with the Wyatt family. Meet Emma, Hannah, Anna-Jane, Carson, and Jake!  Five very different personalities,  each deserving of their own happily ever after... Read
Post a Comment
Read more
More posts