March 22, 2014
This month's Round Robin Topic is Villains!
Do you need them? When do you use them, and what is the most diabolical type of villain to you?

Random House Unabridged Dictionary defines a villain as "a cruelly malicious person who is involved in or devoted to wickedness or crime; scoundrel; or a character in a play, novel, or the like, who constitutes an important evil agency in the plot." Also known in film and literature as the "antagonist" or "bad guy."

I love a good villain! Who can forget Hannibal Lechter, the brilliant psychiatrist and cannibalistic serial killer with a love for a fine Chianti? Professor James Moriarty, Sherlock Holmes' greatest nemesis in The Final Problem. The Joker from Batman, particularly when played by Jack Nicholson. Cruella de Vil from A Hundred and One Dalmations. And--my all time favorite!--The Wicked Witch of the West from Frank Baum's "The Wonderful Wizard of Oz."

So what makes a good villain? Personally, I love a bad guy with a sense of humor. Someone who is basically as human as the rest of us, but has many flaws and performs actions that cause misery to others--sometimes without intention. To be convincing, a good villain needs a strong motive for his actions. He has to believe he's right in what he does and have some redeeming quality that allows some ability for him to become good. Whether he actually could be bothered to change, however, is another matter.

Every story needs a villain. It's a fact. While the antagonist may not be a psychopathic killer or a blood-sucking vampire, every protagonist (hero) needs a foil, someone who makes his life miserable or we wouldn't have a good story. Who wants to read about the hero's day to day life if there's nothing lurking in the shadows to challenge him? A villain gives novels color and excitement.

The best villains, are the ones who can walk the fine line between right and wrong like Severus Snape in the Harry Potter series. A hero for saving Harry and watching over him, Snape was not a good person overall. In fact, the most hated person at Hogwarts! While you don't have to be a good person to be a hero, Snape was a nasty teacher and a downright spiteful man. 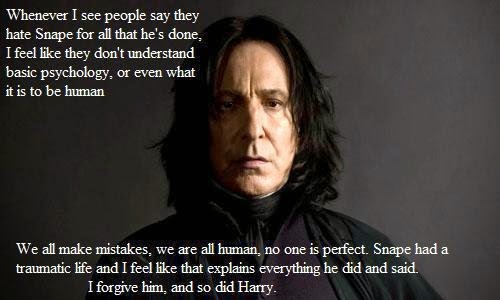 The most diabolical type of villain, for me, is one who pushes the boundaries of right and wrong with no regard for others in the least. At the end of the day, the most frightening villains are the ones who are so real they seduce the reader with their overwhelming evil and remain in our psyches to leave us wondering if we could ever resort to such extreme measures. Anyone for liver, fava beans, and a fine Chianti?

Please join the lovely Fiona McGier to find out what kind of villains she adores!