It's been a while since I was part of the Round Robin Blog Fest. Over the past six months I've been editing my 3 Gilda Wright Mysteries to republish them with a new publisher. Two have already been re-released as Dead Without Honor and Dead Without Glory.
On top of everything else, I've added one more novel to my Wild Blue Mystery series. I've completed book number four. The Painted Lady will be released very soon as well.
As if that isn't enough, I will be releasing a whole new series in 2019! Stay tuned!

How do you develop the tension every story needs to keep the reader involved?
I love when a novel (or even a short story) tells a great story, keeps me entertained and intrigued, and isn’t totally predictable. I’m a sucker for a solid character who is far from perfect.
To keep readers engaged, I use a number of techniques:
·       A character discovering something they shouldn’t know
·       A plot twist – throwing a monkey wrench into the protagonist’s journey
·       Romantic interactions that hint at more to come
·       The protagonist learning something vital to his/her investigation
·       Engaging readers’ emotions
·       Clear and concise writing
All of these are great little hooks to keep readers hanging on to see what happens next, especially with little cliff hangers at the end of chapters.

Just for fun, here’s a little piece from my soon to be released novel Dead Without Pride:

Kane drew in a deep breath. “Okay, love, I didn’t want to have to do this.”
“Do what?”
He lunged around the coffee table to sit on the couch next to her then looked her in the eyes. “Gilda, my darling, you are the only person I trust to help me get this train wreck back on track. My ex-girlfriend left me with a disaster, and I could really use your…um…” His gaze darted down her tank top. “…expertise to help me build the kind of place I want to run.”
Damn those gorgeous eyes and phony Australian accent. Kane knew he had her intrigued the second he set foot through the door. No way would she make this easy.
“No.” Her voice wavered, like her entire body. She closed her eyes and used thoughts of Mick as a shield between them. “I have enough on my plate trying to keep an eye on things at the school while Mick’s out of town.”
“When does he come back?” he asked, his breath sweet with peppermint like he’d planned to get close.
If she told him Friday, she’d set herself up for problems. Today was only Tuesday, and Kane would salivate at the thought of planning out her entire week, both at work and outside of the martial arts school. “Tomorrow.”
“I see. So what time do you have to be at work today?” His gaze never left hers.
Her palms grew moist. “Noon.”
“Then we’ve got lots of time.” Kane stroked her jaw with one finger. “And I have you all to myself for at least the next three hours, love.”
Gilda backed away as far as she could. “Whoa. I don’t think this is such a good idea.”
“Come on, love, it’s a great idea. What are we waiting for?” He grabbed her hand and yanked her off the couch toward the front door. They were halfway to the door before her feet hit the ground. 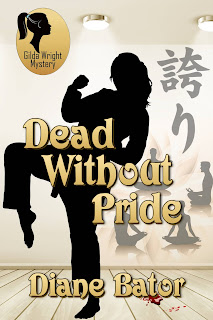 Find out more at: