The Start of Something New

Now that my nest is empty and it's just me & the cats, I have a bit more time to focus on my writing and would love to devote more to my blog as well. One of my ideas is to start promoting my fellow authors. Once a week for now which will stay up for a few days at a time. I don't have a huge blog reach yet but hope to develop that with a little help from my friends. Right now, I'm sorting out the basics but plan to start with my first author at the end of September or early October.

In the meantime, I thought I'd start with some fun stuff about my own Gilda Wright Mystery series. Sit back, relax, and enjoy. If you have any questions, please feel free to leave a comment!

Q) Where is the real Sandstone Cove in the Gilda Wright Mysteries located?
My fictional town of Sandstone Cove is based VERY loosely on a larger town along the shores of Lake Erie called Dunkirk, New York. The shoreline and layout of the town was exactly what I needed for my little town (although I certainly modified the basic map to become Sandstone Cove!)
I was also inspired by a photo I cut from a magazine years ago of a log on the beach that has become Gilda's "thinking place" and her usual meeting place with Fabio, her police officer friend. This version I took on the shores of Georgian Bay. 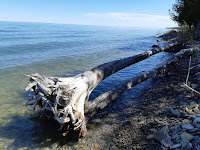 Q) Is there really a Café Beanz?

Yes, there is, but with a different spelling. They use Beans. I found it purely by accident in Barrie, Ontario. I haven't been inside yet, but it's on my bucket list!
My version of Café Beanz is a little deli-style cafe that serves sandwiches and soups for lunch and several kinds of coffees and teas. It's based on the old 50's style diners but modernized in colors and textures. Along with Happy Harvey's, Beanz is one of the hubs of Sandstone Cove.

Q) What kinds of coffees do your main characters drink?

Gilda's favorite all time drink is a latte with cinnamon and chocolate curls.
Mick loves a "double-double" as we call them in Canada, coffee with two milk and two sugar.
Marion takes her coffee hot, strong and with a little milk.
Razi and Kane are both tea drinkers. Green preferably.
Thayer and Fabio, the police officers Gilda has often had to deal with, love their coffee. Thayer takes his black. Fabio prefers to mix it up a little bouncing between coffee to lattes.

Q) How did Happy Harvey's come about?
Happy Harvey's Hangover Hut wasn't the place to go if you had a hangover, more like if you were in desperate search of the means of one. A glorified, tiki-infested liquor and convenience store, Happy Harvey's was owned by Happy—no one had ever called him Harvey—a seventy-year-old man who'd become disillusioned with retirement. He was also one of Gilda's good friends.
Sometimes ideas just pop into my head and I have no idea where they came from. Happy Harvey's was one of them. I combined my love of the tropics with a local convenience store run by a man who wasn't afraid to be a little different. Happy is one of Gilda's supporters and cheerleaders who lets her know what's on his mind and will happily give her both advice and a bottle of wine from time to time.

Q) How did you become interested and learn about karate and other martial arts?
Writing a martial arts based series was years in the making, ever since my ex-husband and kids started karate and Brazilian jiu jitsu classes. All three of my boys earned their first degree black belts and taught classes all through high school.

I was a Karate Mom for about 6 years before I started working at the martial arts school and began my own training. I had to stop as a blue belt in Goju-Ryu karate due to health issues then huge changes in my life. One of the parts of training I enjoyed most was helping instructors at self-defence courses we did at local schools for elementary to high school. At one high school, we were actually in lock down after a teenager from another school came in and stabbed a student in the hallway. It was very sad to see the kids so calm because this happened at least once per semester. Most students were very grateful for an option to deal with the bullies.
Aside from training and self-defence courses, I ran the front desk, rewrote the school's karate manual, and worked on Black Belt grading information packages for the students.

Q) Who are Gilda and Mick based on?
My kids used to call me Gilda when I worked and trained at the school. Aside from that, Gilda and I have very different lives. Gilda is a young, single woman who is protected by a well-known bookie, has a best friend who is a 9-1-1 operator, and is surrounded by strong, handsome men, and chaos.
I am a middle-aged—gulp—woman who is protected by a blue-eyed cat, surrounded by kids, laundry, great friends, and...of course...chaos.
My senseis used to argue about who Mick, Gilda's love interest, was based on. In truth, neither of them were, but it made for a few giggles while people speculated!
As for Marion... Like Gilda, I had great friend at the school I trained with who earned her second degree black belt. She's my strength and keeps me going when I have days I want to give up. While she is no Marion, I would love for Marion to develop
and become more like her.

Q) Writers are always sitting and working. How do you get any exercise?

I used to keep active trying to keep up to my 3 teenage boys who are now grown and off to college and real jobs!
I tried to get into running, but I discovered I have back issues which were made worse by the jarring and impact then fell and damaged my knee. That was the end of running and karate.
To keep busy these days, I walk and do yoga. The best yoga classes are the ones we do outdoors near my instructor's swimming pool in the summer. This year, trying to get back into things after a lot of major changes in my life, I've started a Beginner yoga class to rekindle the passion.
The best part for me as a writer, is I always seem to find inspiration for my books while on walks, in classes, and so on. My mind is in writer mode 24/7.

Q) What's next for Gilda Wright?


I am hard at work on the next Gilda Wright Mystery, Dead Without Shame, coming out in spring 2020.  Here's a short blurb about the book:
Once more, Gilda considers leaving the karate school to work for her friend Happy (no one has ever called him Harvey). When three men rob Happy Harvey’s Hangover Hut killing the woman at the front counter, Gilda is stunned to think that could have been her. Was this a mere robbery, or does someone have a vendetta against Happy, including his good friend Gary del Garda? The evidence keeps piling up while both her mother and another karate instructor come to town bearing secrets that may cost Gilda the life she loves in Sandstone Cove.