Mohan Asktakala talks about "Karma Nation" and "The Yoga Zapper"

Mohan Ashtakala is an initiated Hindu Vaishnava priest and has lived in yoga ashrams across India. His goal is to expose the authentic narratives of the Yoga tradition through the medium of modern, page-turning novels.

He edited a monthly newspaper in Denver, Colorado, for thirteen years and has been published in the Denver Post, the Himalayan News, and other newspapers and magazines.

He has organized conferences on science and spirituality and has presented at interfaith gatherings, diversity conferences and at various churches and schools.

Mohan lives in Calgary, Canada with his wife Anuradha, son Hrishi, daughter Gopi, and Lila, the family’s Boston Terrier. He can sometimes be spotted absent-mindedly chanting mantras in the city’s parks.

A person who encouraged me to write: No one. I had to work against my family's disapproval of my writing, and since I did not go into Creative writing in college, had to go it alone.

Five years from now: I will keep writing, but I try not to make plans. This way, I keep myself open to inspiration. In any case, five years is too far ahead to plan. I try to be in the moment.

What I'm working on now: I am exploring a few ideas, not nothing concrete. My next book may be a historical adventure or a literary romance.

1) When Mohan was twelve, he put together a one-page family newspaper and sent it out to family members. A career was born!

2) When Mohan was young, he attended Loretto Convent in Calcutta for one year. This is the same institution that Mother Theresa once served. (Nope, I never met her. By that time she was well on her way to sainthood, and I was, well…not on my way to sainthood.)

3) Mohan has lived in many different cultures: North Indian, South Indian, Bengali, English Canadian, French Canadian and American. He even spent two years in an Inuit (Eskimo) village on the Eastern shore of the Arctic ocean. That makes him either broad-minded or confused.

4) Mohan’s father wanted him to be an engineer or a doctor; actually both! Mohan turned out to be just a writer. Sorry Dad!

5) Mohan once touched down in Lebanon in the middle of a civil war. The plane landed and immediately took off as the airport was about to be shelled. A funny thing, all the soldiers at the airport looked like Saddam Hussein, right down to their mustaches.

6) Mohan has a degree in Accounting and worked in that field for several years while indulging in his passion for writing. As an accountant, he was a pretty good writer of fiction.

7) Mohan once spent three months in a temple ashram in Bali with his family. Beautiful Bali!

8) Mohan has presented about Hinduism in various churches, high schools and diversity conferences. A few of them even invited him back!

9) Mohan has a son and a daughter. Both are certified yoga teachers. Yes, it runs in the family. 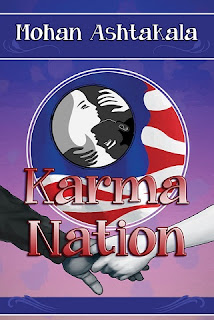 Chantley Armstrong, a white woman raised in an ashram in India, and Sam Johnson, a proud young black man, come across each other in Boulder, Colorado. The intense feelings aroused by the chance encounter suggest that they share a relationship from previous lives.

Chantley sees the world through the eyes of karma. “Everyone acts according to their karma,” she says, “maybe even entire nations.”

Deeply concerned with American injustice, racism and militarism, he asks, “What can you say about a country that starts its history with a slavery and a genocide? What kind of karma is that?”

Once sheltered but now on her own, Chantley struggles to adapt and gain courage, while Sam, deeply intellectual, strives to find his center. Discovering that they may have been lovers at a plantation in South Carolina during the antebellum period, they journey through the South, visiting places and people connected to America’s troubled past and uncertain present.

As they fall deeper in love, their travel exposes conflicts whose origins neither is able to explain. They locate their plantation near Charleston, South Carolina, but its exploration reveals a shocking truth about the real nature of their relationship—one that makes them question who they are, their deep-seated beliefs and the meaning of love.

The Yoga Zapper
A mysterious Sanskrit scripture discovered in an ancient Himalayan temple.
Two brothers from the American heartland sharing a close, yet troubled, relationship.
An evil despot determined to conquer the past, present and future. 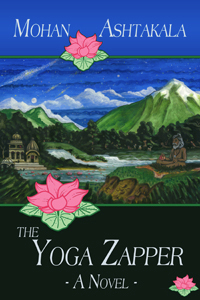 And a beautiful young woman who tests the brothers’ bond.

Little do Jack and Steve realize that the text is actually a prescription for time-travel. In the midst of a deep conflict, they are transported to different destinations. At time’s beginning, Steve’s heart opens to the beautiful Shanti and learns at last to both love and let go. At the ending age, Jack, sucked into the intrigue and treachery of a civilization unravelling under a dark dictator, is finally forced to become accountable for his actions.

The Yoga Zapper uses themes found in the authentic narratives and prophecies of the Indian subcontinent: yogis meditating for thousands of years, Avatars descending from spiritual realms, magical flying craft known as vimanas, and at the end of time (which is also time’s beginning,) a world-consuming battle between good and evil.