Karla Stover tells us about Murder: When One Isn't Enough and Wynters Way 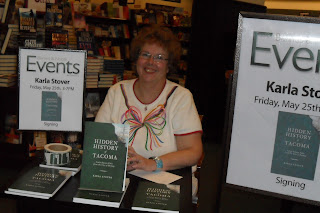 Karla Stover graduated from the University of Washington with honors in history. She has been writing for more than twenty-five years. Locally, her credits include The [Tacoma} News Tribune, the Tacoma Weekly, the Tacoma Reporter and the Puget Sound Business Journal. Nationally, she has published in Birds and Blooms and the Ruralite, Internationally, she was a regular contributor to the European Crown and the Imperial Russian Journal. For fifteen years she hosted a radio program on her hometown, Tacoma (Washington). She won the Chistell Prize for a short story called, “One Day at Appomattox.” She is a member of the Daughters of the Pioneers, the Daughters of the American Revolution, and the Tacoma Historical Society. Her entire working career was at Merrill Lynch.

1.   Tell us about your life outside of writing.
I belong to a very active garden club. In addition to our own yards, we play Flower Bingo with residents at the Orting Soldier’s Home, do community service (this year we hope to clean and plant a currently unloved garden in front of a county library. We help decorate a 19th century mansion at Christmas, run the horticulture building at the Pierce County Fair, and host several horticulture-related 4H meetings.

2.   Do you have a work in progress?
In both Tacoma, WA. (where I live) and Pierce County, residents are extremely supportive when it comes to non-fiction books about the town. I’ve published three and think, this year, I’ll alternate between a novel and a third Tacoma history book. I’m making a presentation to the publisher under its “Wicked” series. So, I’m heavy into local crime, right now. But I’m also starting a book based on the story of a young woman who came here in the 1890s and while here, ended up meeting and marrying a Scottish lord.

3.   What was the most difficult section/piece you ever wrote? What made it difficult?
I think my three novels were all equally hard but for different reasons. I set A Line to Murder in the pre-computer years because I hate it when protagonists make easy use of them (computers, not years. No misplaced modifiers for me). Using a computer to dig up information feels like a cop-out. I quit reading Patricia Cornwell’s Kay Scarpetta series for that reason. That being said, there are things about the ‘80s that I don’t remember. At that time I was in a critique group and was constantly called out on things the other writers didn’t feel were accurate, things such as clothes, music, even internal feelings, and I hate gratuitous sex and don’t have a lot in my books which didn’t go over well. The Hood Canal murder mystery was easier, but Wynters Way took a lot of research.

4.   What sort of research do you do for your work?
Since I am focused on Tacoma, Washington history in both fiction and non-fiction, I read old newspapers. I subscribe to Genealogybank which gives me access to most of what I want. I used to use the New York Times but they now charge to access archived articles. I also make use of “Historylink.org” and Hunt’s History of Tacoma, a very old book.

5.    Which books and authors do you read for pleasure?
Last week I went to my favorite used books site, “Alibris” and ordered a bunch of memoirs. I’m a sucker for what it was like to work for British aristocracy---certainly not Downton Abbey. The amazing women who, with so little education, were able to write their experiences make me proud. But, I am also reading the true story of a woman taken captive by the Indians circa 1760 and how she survived and escaped. We have three vehicles and I have a different book in each one, plus my bedtime book.

6.   Is there an author that inspires you?
I can’t think of any

7. Was there a person who encouraged you to write?
Okay, you can laugh, but I am an introvert and a big daydreamer—always have been. And growing up I loved Anne of Green Gables, Jo March, (Little Women) and Betsy Ray (Betsy, Tacy and Tib.) They wrote so I wanted to, also. I also wanted red hair like Anne had but that’s another story.

Costco, Amazon, Target , the Tacoma History Museum, and the Northwest Shop carry my non-fiction.
The fiction is available through Amazon.