I have a New Release! 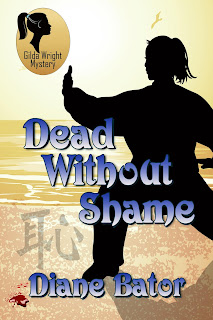 Once more, Gilda considers leaving the karate school to work for her friend Happy (no one has ever called him Harvey). When three men rob Happy Harvey’s Hangover Hut and kill the woman at the front counter, Gilda is stunned to think that could have been her. Was this a mere robbery, or does someone have a vendetta against Happy, including his good friend Gary del Garda? The evidence keeps piling up while both her mother and another karate instructor come to town bearing secrets that may cost Gilda the life she loves in Sandstone Cove.

Detective John Fabio, Thayer’s partner, limped out of the store. “Let me guess. They wore black masks and told you to hand over the money and the girl’s shoes.”
Happy looked up. “He talk fast. Don’t know about shoes.”
“One guy spoke?” Thayer raised his eyebrows. “Did you recognize him? What did he say?”
Gilda patted Happy’s arm as she shot Thayer a scowl. “Maybe you should bring him somewhere warm and quiet. Having an interpreter when you take his statement would be a good idea too. I’m worried things might get lost in translation.”
Thayer folded his arms across his chest. “Don’t you think I know how to take a statement?”
“I’ve been the subject of one of your interrogations. You don’t listen very well.” She mirrored his pose placing her arms across her chest. “I don’t want you to misunderstand what he says.”
Fabio nodded toward a police car a few feet away. “Gilda, can I have a word with you?”
“That depends.” She flared her nostrils. “Am I under arrest?”
“You are not under arrest.”
“Then you can have a word with me.” She drew in a deep breath then kissed Happy’s cheek. “I’ll be back in a couple minutes. Don’t let Thayer get you worked up, okay?”
Happy narrowed his eyes at Thayer. He pressed his lips together and zipped his index finger across them and folded his arms across his chest.
Thayer groaned. “Thank you for your help, Gilda. You can leave any time.”
“You’re welcome.” She flashed a saccharine smile and fluttered her lashes.
Fabio limped around the police car then leaned on the trunk before he ran a hand over the side of his face then back through his hair. Exhaustion had settled over him in the form of weary eyes and a deep frown.
“Looks like you’ve had a long day.” She leaned beside him against the police car and yawned. “What’s up?”
“I know you, Gilda,” he said. “When things like this happen, you get caught up in figuring out whodunit and forget about everything else, like your own safety.”
“But Happy needs—”
He cleared his throat.
“I just want to—”
“Not this time.” Fabio’s jaw tightened in the flashing lights.

Silly Fabio should know better than to say no to our intrepid Sherlock!
Hope you check out Dead Without Shame to find out more...
Buy your copy at https://bookswelove.net/bator-diane/