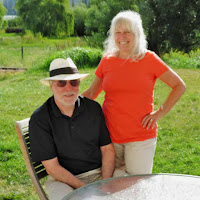 1.LIFE OUTSIDE OF WRITING

Before retiring and taking up writing fiction as a past time, I taught English Literature. (Several talented students of mine have gone on to become successful writers.) My wife and I built a log home in the hills of southern Vancouver Island, and survived totally off the grid for twenty-five years during which time the rooms in that house filled up with books, thousands of student essays were graded, and innumerable cords of firewood were split. Life outside of writing now includes painting landscapes, reading, fishing, cycling, skiing, and travel.

I am working on a first draft of a work tentatively titled Square Saint-Louis, where the troubles in a contemporary family mirror those of the tragic poet Émile Nelligan.
Brendan Young, a Calgary based businessman who travels more than he’d like, admits to having absolutely no patience for the intransigence of his music-obsessed, teenage son, Elliot. Ongoing domestic disputes have intensified over the years: antipathy now verges on hostile rejection. Elinore, an equally conflicted wife and mother, is threatening separation, a source of great anxiety for Brendan who turns to alcohol for the understanding that eludes him on the home front. His sojourn in Montreal, a city not unfamiliar to him, leads him incident by surreal incident, towards greater understanding through familiarity with the tragic story of Émile Nelligan, who, as a nineteen year-old, enjoyed a successful entry into the artistic community of Montreal in the last decade of the 19th century, and then fell victim to madness. Reconnecting with Emery St James Montesquieu, among old antagonists he encounters at a Yamaska College reunion, proves not only enlightening for Young in its mirroring effect — the troubles in his family are reflected dramatically in those of the young afflicted poet — but also redemptive. Elliot, the musician, will have his apotheosis.

The most difficult piece I’ve had to deal with, a chapter, in fact, from Lighting the Lamp titled “Glorious Disorder,” was published in Humanist Perspective (Fall 2019).
On the one hand, the selection deals in a straightforward manner with the nature of metaphysical belief, which can be a very sensitive topic for some readers. On the other hand, my characters have to come to grip with the destructive nature of the Guillain-Barré syndrome. Deeply conflicted about the whys and wherefores of the devastating illness his granddaughter suffers, my protagonist explains that the tragic situation facing the family is not divinely sanctioned but “is simply a disorder arising out of the seeming randomness of the evolutionary process that the cosmos contrived, one that brought us into being, and one that can take us out.”
In reality, my neighbours’ young daughter suffered for months at the hands of this insidious affliction. The whole family was displaced and suffered much. In time, the girl recovered, as does my imagined character.

More recently I research things online. However, the reference books I consult (be they literary, mythological, philosophical, architectural, psychological, historical, scientific, geographical, linguistic) I find on my own shelves or on those of our local library. Most enjoyable is research done in situ, Greece for Shades Of Persephone, for example, and Montreal in large part for Lighting The Lamp and the novel I’m presently working on. Reading other fiction can also be a source relevant information. Simple observation of people helps in many ways, verisimilitude being the objective of the observation whatever the setting. I lean towards mystery in my writing, with romantic entanglement an integral part of the plot development. Greek mythology and literary allusion underpin a great deal of what unfolds. Irony is pervasive.

5. BOOKS, AUTHORS, & SOURCES OF INSPIRATION
I read widely, and have done so for decades, the classics included. At present, works by Ian McEwan, Julian Barnes, and John le Carré await. The muse visits me most often when I read the novels of John Banville.
My reading has definitely influenced my writing. Lawrence Durrell’s The Alexandrian Quartet provided the impetus for Shades Of Persephone. John Fowles’ The Magus gave me the Greek setting. Joyce’s Portrait inspired more than one scene in Lighting The Lamp, as did the philosophical musing of Percy Bysshe Shelley. Marcel Proust plays a part here as well, as do Richard Dawkins, Emily Dickinson, and Albert Camus. The poems of Émile Nelligan are working thematically into Square Saint-Louis.
Teaching literature has had an influence on my writing. When you introduce young minds to the great works of great artists, (e.g., Hamlet, Nineteen Eighty-Four, Portrait of the Artist As A young Man, Gulliver’s Travels, The Handmaid’s Tale), you are constantly challenging yourself to get it right, to understand not only who, what, and when, but also how, and to elucidate on these considerations as discussion ensues. In your own writing, you want to emulate, difficult though it is to do so, but you have to try. 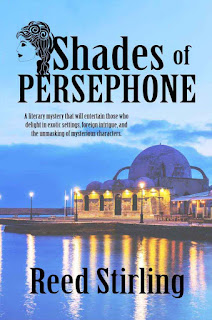 Shades of Persephone is a literary mystery that will entertain those who delight in exotic settings, foreign intrigue, and the unmasking of mysterious characters. Crete in 1980-81, more specifically the old Venetian harbour of Chania, provides the background against which expat Canadian Steven Spire labours in pursuit of David Montgomery, his enigmatic and elusive mentor, who stands accused in absentia of treachery and betrayal. The plot has many seams through which characters slide, another of them being the poet Emma Leigh, widow of Montgomery’s imposing Cold War adversary, Heinrich Trüger. In that the setting is Crete, the source of light is manifold, but significant inspiration for Steven Spire comes from Magalee De Bellefeuille, his vision of Aphrodite and his muse. “Find Persephone,” she directs him, “and you’ll find David Montgomery.”  Her prompts motivate much of the narrative, including that of the Cretan underground during the Nazi occupation, 1941- 45.
Shades of Persephone presents a story of love and sensuality, deception and war, spiritual quest and creative endeavour. The resolution takes an unanticipated turn but comes as no surprise to the discerning reader. Like Hamlet who must deal with his own character in following the injunctions of his ghostly father, Steven Spire discovers much about the city to which he has returned, but much more about himself and his capacity for love. 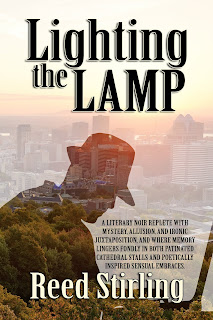 Lighting The Lamp dramatizes the efforts of Terry Burke, a sympathetic, at times caustic and critical, but ordinary old guy, to come to grips with who he is and what his life has been. His struggle to accept retirement and to interpret the iterations of the voice in his head spreads to concern over the mysterious death of a wanderer. Terry’s obsession to solve the mystery fuses directly with his personal history and leads him in and out of fascinating, half-remembered mythological landscapes.

A restive Terry is enjoined to revisit the haunts of his youth. Family dynamics of the present, mirrored in Irish heritage of the past, come into play as do contrarian opinions encountered among cronies, distant friends, and lost loves. Motivated by his muse to tell all, what he seeks in addition to understanding is truthful voice and the purest possible point of view. Aware that remembrance of things past in not necessarily the remembrance of things as they were, this quixotic Everyman eventually reaches beyond self, beyond mystery, and beyond theodicy to a philosophical embrace of cosmic apotheosis. In Lighting The Lamp, Montreal provides more than a background for potential jihad-sponsored terrorism, or ghosts out of the past, or a romantic trip down memory lane; the many-layered city takes on the function of a defined and demanding character and declares in a voice Terry hears clearly: “Know me and know yourself!”