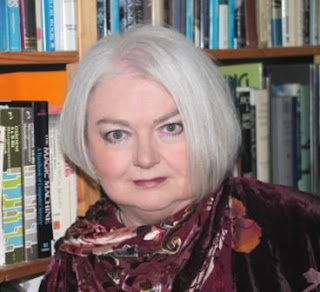 JE (Jayne) Barnard has 25 years of award-winning fiction to her name. Her bestselling women’s wilderness suspense series, The Falls Mysteries (Dundurn Press) follows contemporary amateur detectives as they face death both murderous and medically assisted, along with their individual struggles with PTSD and ME/CFS. Her newest book, ‘Why the Rock Falls,’ delves into the dysfunctional family lives of Hollywood directors and Alberta oil dynasties.

Find The Falls on

Buy Links for ‘Why the Rock Falls’ by J.E. Barnard

Women’s wilderness suspense. My work has been described as ‘small town psychological thrillers’ but the small towns are out in the wilderness and my heroines must deal with wild animals, rough terrain, and natural phenomenon like floods and blizzards as well as deadly human predators.

Does your reading choices reflect your writing choices?

As a child I read extensively of mystery series such as The Three Investigators, Nancy Drew, and Trixie Belden. As I grew older I wanted to understand not only what crime occurred and how it was solved, but why the people involved acted as they did. Interestingly since I started writing the Falls Mysteries, I don’t enjoy reading crime as much as before. I keep seeing through the surface to the bones, the author’s structure and choices, instead of becoming immersed in the story. So now I read more fantasy fiction for enjoyment.

Dogs. Any scene with a dog in it has a great personality to play with.

Actually, it’s the main character in whichever scene I’m working on that day. The Falls Mysteries have two main point-of-view characters: ex-cop Lacey, who is burnt-out, cynical, and suffering PTSD from both her job and her marriage to an abusive fellow officer; and Jan, who has a good marriage but a chronic disabling illness, ME/CFS, which has stolen her art history career, her plans to travel & have children, and generally robbed her of the life she expected. These women don’t talk the same or think the same; they don’t bring the same skills to the investigations. I’m very attached to both of them, and it’s constantly interesting to me to watch their personal growth and healing while keeping their investigations moving.

Write from what you know. Yes, you’ll have to do research along the way. But if you start from a solid base, your writing will reflect your confidence in that part of the project. If you start from a shaky base, not only will your characters’ knowledge of that topic seem forced but readers will be less willing (on a subconscious level) to trust the character, and by extension your whole story.

An example: a woman I once worked with on a manuscript wrote a heroine who was writing a cookbook. Yet this heroine was rarely in a kitchen & never noticed food. She plodded through uninspired writing in scene after scene, not quite coming alive.

Whenever the character called upon a suspect, however, she noticed – and could name – every plant in their garden, the health of the grass, and so on. The writing in these sections was purposeful, flowing, laden with details that were interesting as well as related to the mystery.

I asked the writer whether the character would be better off writing a garden book. She admitted she loves gardening and dislikes cooking, but thought a mystery with a cookbook author would an easier sell. She was writing about something she didn’t know or care much about, and the writing revealed it.

Write from something you already know, and spread out from there.

As I’ve been writing series for the past six years, using the same two sets of characters, it’s hard to recall from those. My new project is a standalone, though: a teen thriller about a foster child. This one definitely started with the character. Before I started writing I knew what she looked like, how she sounded, what she loved, and what she most deeply feared. The plot worked itself out later.

My teen thriller follows a foster child whose best friend gets her entangled with a sleazy drug dealer and the crooked politicians who protect him. I’ve just sent the manuscript off to my agent and now I simultaneously have complete confidence that she’ll adore my vulnerable-yet-fierce young heroine as much as I do and am about equally terrified that she’ll hate the girl & the story. 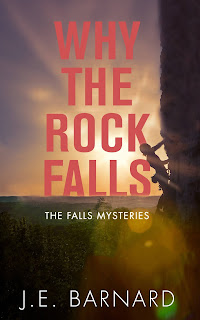 WHY THE ROCK FALLS : The Falls Mysteries

Danger lurks in the wilderness of the Rockies. When a Hollywood director's wife dies during a local movie shoot, filming is suspended. The death also spells the end of ex-Mountie Lacey McCrae's latest temporary job. At loose ends, Lacey volunteers to help in the search for an aging oil baron and his son who have disappeared in the foothills of the Rockies. As drone operators scan the forested valleys from the air and rock-climbers rappel down narrow chasms in search of the pair, Lacey dons her Victim Services' cap to ease tensions among the missing oilman's four adult sons and three ex-wives. As the squabbles over the possible inheritance intensify, Lacey uncovers a surprising link between the missing oilman and the big-shot director. But an unexpected event sends Lacey out on a risky trek across an unstable mountainside on the trail of a murderer who is bent on killing again.