I had the pleasure of pre-reading her upcoming book Collectors, Cats & Murder and loved her writing style! If you like a fun, good read, her books will not disappoint! Read on to find out more about her! 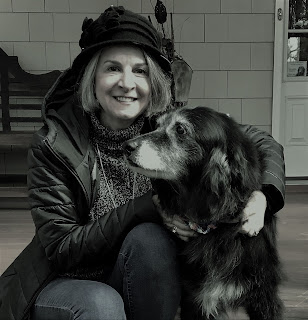 Picture Kathy Manos Penn sitting serenely at her desk surrounded by her four-legged office assistants. Happily retired from corporate America, she’d never considered being an author until someone suggested she write a cozy mystery.

As a child, she took a book everywhere—to family dinners, to doctors’ offices, and of course to bed. Years later, a newspaper article inspired her to put pen to paper and submit her thoughts to the editor. Before she knew it, she was writing weekly columns and blogs—in addition to her demanding day job. Then came a book co-written with her dog. As she says, “Doesn’t everyone do that?”

Now, she’s writing cozy animal mysteries featuring a dog and cat who converse with their owner. If a dog can write a book, surely animals can communicate. Naturally, her office assistants help with the dialogue. And, yes, they’re angling to be listed as co-authors.

I’m one of those retirees who’s busier now than I ever was when I worked a crazy corporate job. I may not be working fifty-hour weeks anymore, but I fill my time writing weekly columns for a small local paper and working out three times a week. Like most of us, I used to enjoy lunch and coffee with friends several times a week. My husband and I have enjoyed traveling more since I retired, but again, all that’s on hold.  I start every day with coffee and the Wall Street Journal and playing Words with Friends, just like the protagonist in my cozy series.

My third book—Whiskers, Wreaths & Murder—came out in September, and by the time this interview runs, I should have edited my fourth book based on the feedback from my Beta Readers and then sent it on to my editor. Hopefully, it will be published sometime February 2021. Also, hopefully, I will be busy writing Book Five. Ideas are rolling around in my brain right now.

Honestly, I haven’t encountered anything that would qualify as difficult. What I dislike writing are conflict scenes. I know, I know, it’s expected that a character will have conflict with someone. Maybe because I’ve always avoided arguments and conflict of most sorts, those scenes are uncomfortable for me.

I research all kinds of things online. I usually have an idea in mind, but my research may take it in a different direction.  For the first book, I reread the notes I took on our 2018 trip to the Cotswolds and came across the mention of J.M. Barrie and other authors summering in the village of Stanway. I started googling that and before I knew it the storyline took off with a Peter Pan focus.

For the third book, I needed to understand the entail process for titles in the UK.  I don’t go into tons of detail in the book, but I needed to have a firm grasp so I could simplify it for my readers.

I’m an anglophile through and through. I read novels by Charles Todd, Deborah Crombie, Elizabeth George, and a host of other authors whose stories take place in the UK. Who inspires me? Louise Penny. She wrote her first Gamache novel when she was in her forties, and just look at her. I find her amazing and enjoyed hearing her speak at a small college in North Carolina.

Much of my job during the last ten years of my banking career involved crafting speeches and presentations for senior leaders. When I began writing columns and blogs on the side, my immediate boss got a kick out of them and was very supportive. He got such a kick out of the blogs written by my dog that he kept saying I should turn them into a book.  When I retired, I did.

It was a fun project, and Banjo—my dog—enjoyed selling the book at local festivals. But it wasn’t a novel; it was more of a diary, written by the dog. I met a marketing coach online who looked at my writing and gave me a few writing prompts.  After reading my stories, she came back to me and suggested I write cozy mysteries.  That idea had never occurred to me. She was with me every step of the way, pushing, coaching, and cajoling me. If not for her, there would not be a Dickens & Christie series. 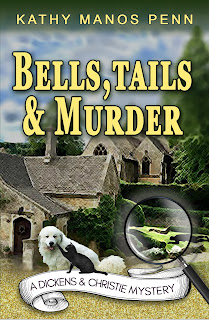 She crossed an ocean to start her life over. Can she nab a killer before her quaint village becomes a graveyard?

Recently widowed Leta Parker desperately needs a change of scenery. Pursuing her lifelong dream of retiring to the Cotswolds, she leaves her soulless corporate hustle in Atlanta and moves to England with her talking dog and cat companions—Dickens and Christie. But she’s barely begun making new friends when she stumbles across her housekeeper’s body …

With several villagers pegged for the crime, Leta teams up with a retired English teacher and her sharp-as-a-tack octogenarian mother to track the killer before the trail goes cold. As the not-so-friendly local policewoman elbows them out and scandalous rumors plague the tight-knit community, it’s left to the ladies and their pets to sleuth for the truth.

Can Leta, Dickens, and Christie sniff out the culprit before the cute little town loses more than its charm? 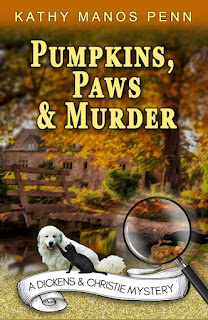 Leta Parker is back with her talkative companions—Dickens the dog and Christie the cat.

Though Leta’s still haunted by her tragic loss, moving from Atlanta to the village of Astonbury has given her a new lease on life.

Leta’s days are filled with yoga, book club, walks with Dickens, naps with Christie, and outings with friends. Add preparations for the Astonbury Fall Fête—complete with scarecrows, pumpkins, and costumes—and she’s beyond busy.

All is well until a dead body is discovered on the riverbank, and once again, Leta and her sleuthing girlfriends are drawn into a search for a killer—a search that takes them to Dartmouth on the coast of England.

Will Dickens sniff out clues closer to home? Or will Christie the cat outthink them all?