Welcome to author Steve Demaree and a belated Happy Anniversary to he and his lovely wife! Steve has an amazing selection of mystery novels that I can't wait to add to my To Be Read pile! 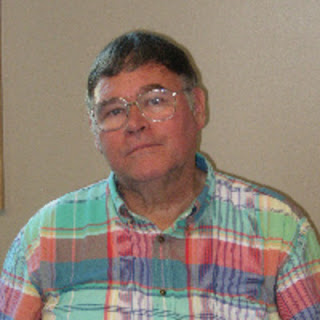 I’m seventy-two years old and my wife Nell and I celebrated our fifty-first anniversary on Sunday November 8. We have one grown daughter. I’m a native of Lexington, Kentucky who never left town. I worked a few different jobs early in my life, then settled down in business until I turned forty, when I started writing and became a movie critic. At age forty-five, my wife talked me into going to college for the first time, but she would not let me date any of the girls in my classes. I started out thinking I would pursue a degree and made the Dean’s List. When I told my advisor that I wanted to write rather than work for someone, she told me to take only writing classes. That went well until I took a desktop publishing class, and I had to use an Apple computer. The professor came to class each day, gave us an assignment, and left. I got so frustrated because I couldn’t understand desktop publishing on an Apple computer and the professor wasn’t around to answer questions, and didn’t want to keep asking the girl next to me questions every five minutes that I walked out one day and never went back. Five years later, I quit reviewing movies and published my first book, a book of inspirational short stories. I sold 220 copies the first year and wrote another book. Many years later, two author friends told me that I needed to have e-books. It took them several months to convince me. One of them told me about BookBub, I sent one of my books to BookBub and they turned me down. The second time BookBub accepted me, 53,000 people downloaded my free book the first day, and I sold 527 of my other books that day, and my career as an author began to take off in a way it hadn’t before. Now, I have readers all over the country and in several other countries, and I have one series of eighteen books that is very popular. Many of my readers like my characters, my humor, and the fact that none of my books contain profanity, sex, or graphic violence.

My latest release is The Wrong Place, a stand-alone mystery that was just released on November 6. It is about a best-selling mystery author in his early thirties who finds himself saying “yes” to something when he should have said “no.” He ends up being drawn into a murder investigation where he is making better progress than the police and draws the wrath of one of the two detectives involved in the investigation. It is a whodunit laced with humor.

I’m currently working on the nineteenth book in my Dekker Cozy Mystery Series, Murder Logically Speaking. In it, an elderly woman is released to her granddaughter’s care after weeks of rehab from a fall down her basement steps. She arrives home to a meal provided by her neighbors, but the next morning when her granddaughter goes to wake her, she finds her dead. An autopsy shows she was poisoned by something she ate or drank. It is determined that she was poisoned by one of six neighbors or one of her two grandchildren. This book should be released in February.

I have always enjoyed writing, ever since I started writing letters to teenage girls when I was a teenager. I know longer write letters to teenage girls, but after becoming a movie critic for ten years and earning less than a homeless person, I turned to writing books and published my first book at age fifty-two. I found writing less strenuous than work, so I’ve now written thirty-five books. I didn’t really have anyone who encouraged me to do this.

I think my biggest strengths as an author are that God gave me a vivid imagination and a sense of humor, and I’ve developed a good work ethic and enough knowledge to know when I need a break.

I write five days a week, four or five hours a day, and I usually stick to this routine. I start writing in the late morning and quit sometime in the late afternoon. I need quiet to write and write on a desktop computer. I don’t like laptops. I usually take off most of the months of March and December, and, if conditions are normal, my wife and I take an eleven-day vacation in early June, and a week vacation in late October. When I started writing, twenty years ago, I wrote only one book a year. Now, I write two to four books a year, but I don’t push it. Whatever happens, happens.

I’m seventy-two years old now, so I don’t know whether I’ll still be writing five years from now or not. 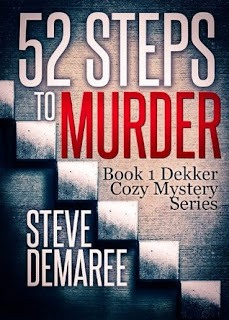 Two detectives, who detest exercise in any form, arrive at the scene where a woman has been poisoned in her upstairs bedroom and find that they must climb fifty-steps just to get to the front porch. Later, they realize they have to do the same thing to question the neighbors to see if they saw anyone enter her house. This is the first of eighteen books in a series. 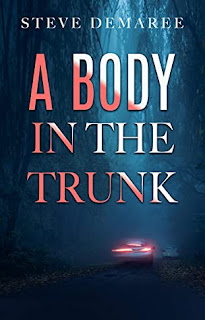 A BODY IN THE TRUNK

On the last day of school, a first-grade teacher is too busy saying goodbye to her students to think about how she is going to spend her summer. But she never envisions that, after agreeing to see a movie with her friend the next night, she will find herself at midnight, on a deserted country road, with a flat tire, and a dead body in her trunk. This is a stand-alone mystery that might end up as the first book in a series. At least, people have told me they want more books with this character.