Welcome to author Carmen Radtke! I just adore her 1930s inspired covers and her story of how she became an author! 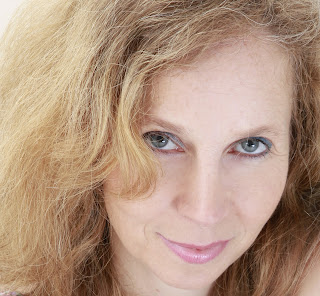 Carmen Radtke has spent most of her life with ink on her fingers and a dangerously high pile of books by her side. She has worked as a newspaper reporter on two continents and always dreamt of becoming a novelist.

When Carmen found herself crouched under her dining table, typing away on what was to become “Walking in the Shadow” between two earthquakes in Christchurch, New Zealand, she realised she was hooked for life.

She’s the author of the cozy historical mysteries “The Case of the Missing Bride”, “Glittering Death”, both featuring Alyssa Chalmers, the Jack Sullivan quick read “False Play at the Christmas Party” and the Jack and Frances historical cozies, “A Matter of Love and Death”, “Murder at the Races”, and “Murder Makes Waves”. She’s busy writing the next Jack and Frances adventure.

When Carmen is not writing, reading or dreaming of travel, she is busy acting as resident cat servant or tap-dancing (badly).

Her website (very much a work in progress) is www.carmenradtke.com

Apart from my imagination and love of stories? I used to be a journalist, so I tend to be a stickler for research, especially when it comes to my historical cozies. Although it can be tough to say good-bye to some clue or riveting detail because it just doesn’t work with the timeline. Even if it’s something trivial like Cole Porter coming up with the musical “Anything Goes” a couple of years too late. Maybe I should continue the series until Jack and Francs catch up with him … There’s an idea!

I write most days, but not to a strict routine. Paid work (I write content articles) burns under my nails until I get them out of the way. If possible. I work on my novels during school hours.

Hopefully making a decent living from my writing and still enjoying it!

First get it written, then get it right. When I was working on my first novel, I spent days agonizing over a wonky paragraph. It’s freeing to allow yourself just to write that first draft without worrying about perfection, put it aside, and then rewrite. Remember, you can take as many drafts as you need.

Also, not everyone will love your work and that’s okay. What matters is that you love it and you’ve done your best. If you intend to publish it, make sure you get feedback from other writers or a professional editor. Take their nots into account but don’t blindly agree “because they know best”. Not every point of critique is valid, but they are all worth mulling over and then deciding if you want to act on them or not.

The best compliment was a reader saying about Walking in the Shadow that it had restored her faith in humanity. Another reader emailed me to say that my books had given her a few precious hours of respite during the early weeks of the lockdown. Is there anything better than touching someone’s heart in a positive way?

I’m currently working on the next Jack and Frances mystery, which will take them to France, and on the idea for a new contemporary series. At least being a writer is never boring. 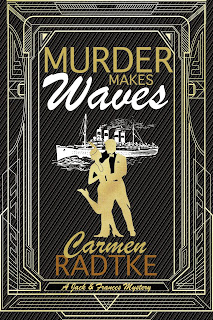 It’s a dream come true for Frances Palmer: A voyage from Australia to England on the “Empress of the Sea”, together with her fiancé Jack Sullivan and her Uncle Sal, aka “Salvatore the Magnificent”. They’ve been hired to entertain the passengers with magic tricks and daring stunts.

But all is not well below deck, with jealousy and larceny ruffling the cheerful atmosphere.

Frances and Jack soon find themselves in stormy seas, together with newfound allies. When a passenger is found dead after a costume ball and one of Frances’s new friends is accused of murder, they decide to secretly dive into the case.

Nothing is plain sailing, though, against a cunning murderer. Will Jack and Frances and their friends get to the bottom of the truth, or will they sink in the sea of deception?

Murder Makes Waves is the third mystery in this cozy series set in the early 1930s. 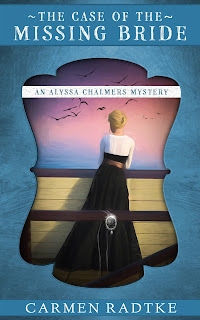 THE CASE OF THE MISSING BRIDE

Setting sail for matrimony – or something sinister?

1862. When a group of young Australian women set sail for matrimony in Canada, they believe it’s the start of a happy new life.

But when one of the intended brides goes missing, only Alyssa Chalmers, the one educated, wealthy woman in the group, is convinced the disappearance is no accident. She sets out to find out what happened.

Has there been a murder?

Alyssa is willing to move heaven and earth to find out the truth. She is about to discover that there is more to her voyage into the unknown than she bargained for, and it may well cost her life.