Nancy Lynn Jarvis tells us about The Funeral Murder and a Cozy cookbook! Nancy Lynn Jarvis left the real estate profession after she started having so much fun writing the Regan McHenry Real Estate Mysteries series that she let her license lapse. She’s enjoyed writing about Regan and her husband, Tom, but decided it was time to do a new series.

After earning a BA in behavioral science from San Jose State University, Nancy worked in the advertising department of the San Jose Mercury News. A move to Santa Cruz meant a new job as a librarian and later a stint as the business manager for Shakespeare/Santa Cruz at UCSC.

Currently she’s enjoying being a member of Mystery Writers of America, Sisters in Crime, and Santa Cruz Women of Mystery.

Right now my life is dominated by trying to get home. My house survived the CZU Fire in the Santa Cruz Mountains that began on August 17th, but it’s still not habitable. I’m mourning the loss of my gardens and gorgeous forest and it will be well into spring before my home is put back together, but redwood treed are survivors and I’m seeing life and green again. I wasn’t going to rebuild the acre garden, but my life rose―started from a bouquet of pink roses my dad took to my mom in the hospital after I was born―which burned to the ground is growing and even blooming, a sign that my rose and I are not finished yet.

I always have a work in progress even if it’s only roaming around in my head. I have the start of the first Geezers with Tools series I’d like to do, but will probably put it aside when I settle down in earnest to write the next book in the PIP Inc. Mysteries series.

I did just add a short story to “Bodies in Bonny Doon,” an e-book on Amazon that I add to as the mood moves me. The Pool Guy is a post fire story, mostly fiction, (I’ll let readers decide where the line is drawn) and if you would like a free copy of the book, send your e-reader address to nancylynnjarvis@gmail.com and I’ll gift you a copy.

The hardest bit of writing I’ve ever done is the ending of “The Two-Faced Triplex,” the last book I wrote in the Regan McHenry Real Estate Mysteries series. When I began that series, my protagonist, Regan, and her husband, Tom, were me and my husband, Craig. The characters immediately took on new names and personalities until the only Nancy and Craig that remained were my Irish heritage and Craig’s intensely blue eyes.

After Craig died, I saw his eyes every time I wrote Tom’s dialogue and it became difficult for me to do. I knew the book would be the last in that series and I debated whether or not Tom would survive the book’s ending. The last few pages were torture to write as I made that decision as I wrote.

I do extensive research for my books. For example, I know about redwood trees range and how they water themselves, about a small heel bone modern humans no longer have because of the invention of chairs, the history of cat litter, and how batrachotoxin and tetrodotoxin kill, to name just a few of the things I’ve researched. You should see the bizarre ads I get on Facebook because of the research I do.

Inadvertently, yes. I started writing because I was a Realtor who decided to take a time-out when the housing market crashed in 2008 and quickly got bored. I had an idea for a book beginning and end and no idea how I would connect them, but I started writing as a game to entertain myself. A friend who got up before work every day to write was visiting and caught me at my laptop. She was furious about what I was doing and said one couldn’t simply decide to write a book without taking classes, have a mentor and a critic circle, and suffering for their art.

Although she was disciplined and, I thought, a terrific writer based on what I read of what she wrote, she never finished anything because of all the advice about how her book(s) should progress she received from all those influences.

I took her ire as a challenge and finished “The Death Contingency” to show her I could, but never intended to do anything with it. That changed when she called a few months later and said she was dying. She said she regretted never finishing a book and seeing her name in print. I dusted off my manuscript and self-published it in a hurry with a dedication to Charlotte Bridges so she could see her name in print before she died.

The curious thing about writing mysteries is that you tend to get hooked on writing them, so I couldn’t stop after just that one. 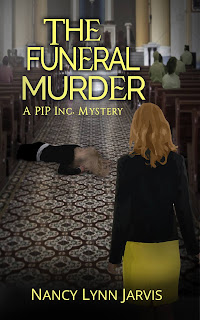 In The Glass House, the first book in the PIP Inc. Mysteries series Pat Pirard, recently downsized Santa Cruz Law Librarian, needed to find a new job in a hurry. She printed business cards announcing she was Private Investigator Pat and crossed her fingers, hoping she could earn enough money working for attorneys as a PI to survive. Pat’s first investigation went well, so she’s excited when she gets a call from an estate attorney who offers her a second job. The attorney tells Pat his client died at a funeral and he needs help sorting out who is entitled to inherit her estate. Pat quickly discovers the dead woman’s past is as complicated as her estate. And when an autopsy indicates she had two deadly toxins in her body when she died, Pat’s new case becomes not only complicated, but dangerous. Normally I wouldn’t include a book I edited, but it’s the holiday gift giving season and this cookbook is a fabulous gift for foodies and cozy mystery fans!

What happens when 128 cozy mystery writers get together to do a cookbook? You get more than 220 recipes that are as varied and interesting as an amateur sleuth’s day job. Regional recipes come from every part of the United States and England — a couple find their way from Australia and Italy, too — and from diverse times. There are recipes from people looking to keep gluten out of their lives, eat vegetarian, or make a treat or two for their furry four-legged friends. And yes, there are recipes that appeal to the sweet tooth, lots of them, in fact. There’s no mystery about what happens when cozy writers get together. They bring the wit, inventiveness, and adventure found in their books right along with their recipes. The recipes are introduced by their authors and linked to the writer bios in the back of the book. You can look up your favorite cozy writer and see which recipes are their favorites; they'll tell you what the recipe means to them. Or you can enjoy a dish and then link to the recipe's author's biography and books. Either way you enjoy the cookbook, you're sure to find great new recipes to make and terrific new cozy authors to read.