Myron Edwards introduces Scylla - The Revenge and Mistress of the Rock 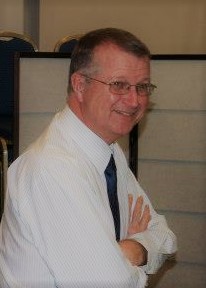 Myron was born in 1952 in Orsett, Essex, England, as the youngest son to Welsh parents, Iris and Bill Edwards. Upon leaving school, he went into the travel industry. He travelled the world, working in travel agencies, as a tour operator, and for airlines for some 30 years. In 1976, Myron began freelance writing for the BBC, radio and television. His credits include The Two Ronnies, Week Endings, and The News Huddlines. In 1980, he joined JWT advertising, as a copywriter, writing his first TV commercial for dog food inside 10 days.

Always artistic and inventive, he created Tubewalking in 1987, a new map concept, to help people get around London easier on foot, which still operates today. In 1990, he married Niki, whose family background is Greek Cypriot. On a family trip to Cyprus and while visiting Aphrodite’s Rock for the first time, the beginnings of his passion to write the story of Mistress of the Rock came to fruition.

Moving his family in 2005 to Cyprus to live, gave him the opportunity to write, as during this time he worked on campaigns for TV and Radio in an advertising agency in Limassol. The first manuscript of the book was completed in 2007. Released by a local publisher, it had a limited audience, but was well received by those who read it. He has now completed the sequel and is working on the third part of the story. Myron has three adult children, two sons and a daughter.

The latest book is Scylla The Revenge this is the second book in The Mistress of the Rock Trilogy.

The third part of the Trilogy Alpha and Omega, The Return.

I fell into writing whilst working as a freelance comedy writer for the BBC.

I like to create pictures in my head which are then translated onto the page.

Not really when the mood takes me or if I have an idea for a book.

Well hopefully alive, but seriously I would love for my books to be read by a world wide audience and produce a film series.

My website where you can also see links to YOU TUBE - for videos about the secret www.myronedwardsbooks.com 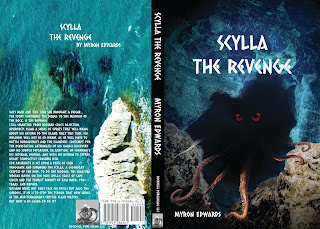 She’s back and this time she’s brought a friend…

The story continues: the sequel to The Mistress of the Rock, is The Revenge.

Still smarting from her rebuke by Richard, Aphrodite plans a series of events that will ultimately bring about the return of Richard Cole to the island. Only this time his welcome will not be so warm, he will have to battle the bureaucracy and the contempt felt by some of the islanders for his sudden departure and the aftermath of his chance discovery.

In addition, he has to battle his own demons that inhabit his waking hours and now with his return to Cyprus, possess him even more.

For Aphrodite is set upon a path of cold revenge and summons the Scylla a mythical cryptid of the deep to do her bidding as the creature wreaks havoc on the once idyllic coast of Cape Greco and the tourist resorts of Ayia Napa and Protaras and Paphos.

Cole must not only face his demons, but he must face the goddess, if he is to stop the terror that now lurks in the crystal-clear waters of the Mediterranean.

But how is he going to do it? 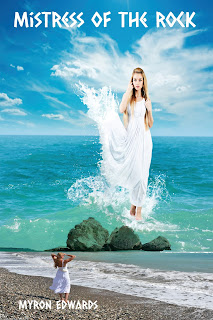 MISTRESS OF THE ROCK

All’s fair in love and war, or is it?

For Richard Cole ex veteran of the First Gulf War the memories of conflict have become the nightmares of his reality. Only by confronting them can he begin to live again.

He returns to the island of Cyprus some 20 years later from where it all began, for a vacation with his wife Julie.

But a chance discovery places him in a dilemma, as he discovers that Greek Gods and mortals should never mix.  Now with Richard Cole powerless to stop the momentum of a phenomenon that tests him to his limits, challenging all that he knows and all that he loves against a fantasy of myth and legend he must struggle to find the truth between what is real and what is not, but at what cost?

On the island of love one man’s obsession turns to possession as his mind, body and spirit are trapped between two worlds and two women.

‘The Mistress of the Rock is a very possessive spirit she does not give her affections lightly.’

As Richard Cole is about to discover.

And my publisher www.rockhillpublishing.com carries them all.