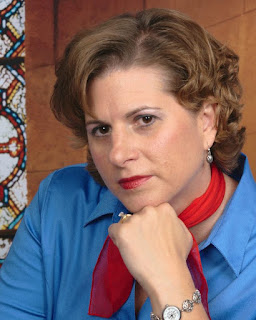 Ellen Butler is the international bestselling author of the Karina Cardinal mystery series and award-winning historical suspense, The Brass Compass. Her experiences working on Capitol Hill and at a medical association in Washington, D.C. inspired the mystery-action series. The Brass Compass has won multiple awards for historical fiction and is compared to such bestselling novels as Kristen Hannah’s The Nightingale. Ellen lives with her husband and two children in Northern Virginia.

You can find Ellen at:

When I began my writing career, I started in the romance genre and my novels were character driven. I had vague ideas of where the plotline went, and what the climax would be, but the relationship came first. I allowed the characters to drive the love story. However, as I moved into the thriller/mystery genre, trying to panster a mystery plot became a nightmare with lots of rewrites and plot holes. I realized the need to fully plot my stories. Now the plot comes first. Since I write a series, many of the characters are already developed, I simply slip in new characters as needed to fill the out the storyline.

My historical spy novel takes place during WWII, so my villains were laid out for me in the form of Nazis. However, I will share a character with you who is a bit of an enigma. He is a French soldier in the German Army. He begins to help my heroine, however when they come upon members of his military unit, he turns her over to his commanding officer. The reader is led to believe that he will still help her, but he doesn’t come to her rescue while she’s being brutally interrogated. The interrogation ends when Allied forces attack the town. Our Frenchman is killed by Allied forces, so we don’t really know if he would have helped her or not. Some readers dislike his character because he is not shown to be black or white, but rather someone who wants to help, but not enough to put his own on hide on the line. Is he true villain or is he simply a coward? Are his actions, or lack of, only human?

It’s funny you asked this question. Initially, I would have said, “maybe somewhat.” However, during Women’s History Month, I’ve been writing a series on my own blog about female authors who influenced me. They are all thriller/mystery/suspense authors. While I do read many other genres today, in my formative years, I’ve come to realize mystery authors were my go-to. And it all started with Nancy Drew.

Sidekicks with personality. I enjoy writing quirky characters like Karina’s neighbor, Mrs. Thundermuffin. She wears wacky clothes, walks her cat, Mr. Tibbs, on a leash, and seems a little dotty. She ends up drawing Karina into a chaotic adventure with an Egyptian death mask and the reader finds there is much more to Mrs. T. than meets the eye.

I’m working on the next Karina Cardinal mystery, Swindler’s Revenge. Someone has framed her FBI ex-boyfriend, Mike Finnegan, and he delves deep undercover to find out who. He needs help from outside the FBI and reaches out to Karina. Even though it’s been splitsville for a couple of months, she still considers him a friend and believes he’s innocent. Classic Karina, she delves in with both feet regardless of the dangers that surround her actions. Swindler’s Revenge releases September 2021.

LOTS and LOTS. Luckily, I live in the Washington, D.C. area, and I have friends who work (or worked) for certain 3-lettered agencies, police departments, and on Capitol Hill. I tap into those folks for dialog and behaviors for my Karina Cardinal characters. I do additional research depending on the plots. For instance, the first Karina Cardinal mystery, Isabella’s Painting, incorporates the Isabella Stewart Gardner museum heist which happened in 1990. $500 million worth of art was stolen and never recovered. I spent long hours researching the numerous theories as to who stole the art and why. I interviewed a retired FBI agent who worked in the Art Crimes division during the heist to get his take on the burglary. I write Afterword’s for the Karina Cardinal mysteries focusing on a particular aspect of my research, to inform the reader what is fact vs. fiction. 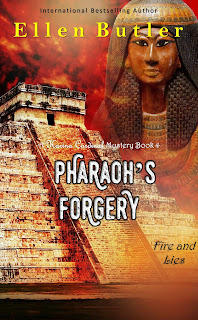 Margaritas, mayhem, and murder. Too bad her only defense is a cocktail umbrella.

After some of Karina Cardinal’s recent adventures—her lover Mike Finnegan would call them scrapes, jams, or pickles—she’s more than ready to blow this D.C. pop stand for a short girls’ trip to Mexico. Until Jillian’s roller skate wreck blows their plan out of the water.

With Jilly injured and Mike working, her fellow lobbyist Rodrigo volunteers to share some sun, sand, and margaritas in Cancun. It’s tough to relax, though, knowing what’s in her suitcase. A package she promised to hand off to Mrs. Thundermuffin in Mexico.

Mrs. T’s evasive maneuvers around Karina’s questions wave more red flags than a bullfighter, leaving Karina no choice but to take a peek. Okay, so it’s not a kilo of something illegal. It’s an Egyptian death mask that turns out to be a magnet for crooks, conmen, kidnappers, and outright killers.

When the situation explodes into chaos, Karina and Rodrigo are lucky to have friends in the right place—at their backs. But they’re in one hell of a jam. And they could be going home in something tackier than a souvenir t-shirt—more like a body bag.