Welcome back to cozy mystery author, Kathleen Kalb who has released her second book! 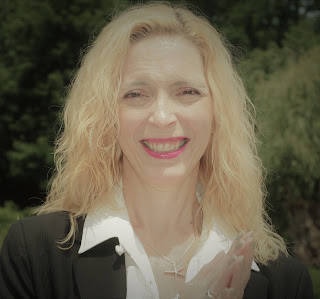 Kathleen Marple Kalb grew up in front of a microphone, and a keyboard. She’s now a weekend morning anchor at 1010 WINS New York, capping a career begun as a teenage DJ in Brookville, Pennsylvania. She worked her way up through newsrooms in Pittsburgh, Vermont and Connecticut, developing her skills and a deep and abiding distaste for snowstorms. While she wrote her first (thankfully unpublished) historical novel at age sixteen, fiction was firmly in the past until her son started kindergarten and she tried again. She, her husband the Professor, and their son the Imp, live in a Connecticut house owned by their cat.

WHERE TO FIND ME:

I’m absolutely character-driven. First, I come up with a group of people I want to spend time with, and then I figure out what to do with them. It often grows out of the characters’ lives and work: A FATAL FIRST NIGHT starts with a backstage murder at Ella Shane’s current production, and the murder trial that reporter Hetty MacNaughten is finally allowed to cover. Most of the twists grow out of the characters’ relationships and their expectations. Not that I don’t spend plenty of time on plot. In FIRST NIGHT, there are two interlocking cases, and (hint, not spoiler!) you don’t know until the very end how everything is connected.

All villains aren’t killers…and all killers aren’t obvious villains. Many of the nastiest characters in my work are simply horrible humans, but not necessarily the murderer. I like to think that all of my characters seem real and human, since they are to me, so the killers are often appealing people. Usually, they’re driven by ambition or need, and don’t understand why what they’ve done is wrong.

Sure do! I’ve been a history buff since I was a kid, and the Victorian Era was always a favorite. Years before I was writing the Ella Shane series, I was marinating in the time period, and absorbing the details and the mores of the period. More, I grew up on ANNE OF GREEN GABLES and other late-Victorian fiction, and just loved the sense of a big cast of lovable people in a close-knit area. And, of course, the story of the poor orphan girl who makes good with a found family. History is still my go-to read when I’m working on a new project or just stressed. I’m reading Alison Weir’s biography of Elizabeth of York right now!

Actually, as much fun as it is to “be” the main character and see the story through her eyes (I write first person), it’s often most satisfying to create a supporting character, or someone who has a small, but unforgettable role. Those vivid little portraits, like the judge in the trial in FIRST NIGHT, or a bitter retired opera singer in FINALE, are really fulfilling for a writer. I take a lot of joy in creating those folks, whether or not we see them again.

The third Ella Shane is in process – coming next year from Kensington. I’m well into a fourth, but I can’t tell you the frame without a major spoiler, so let’s just say that if/when it happens, it will be a lot of fun. Also on my plate, under the pen name of Nikki Knight, is a contemporary cozy set at a Vermont radio station: LIVE, LOCAL AND DEAD is due next spring from Crooked Lane. And, I’m working on an entirely new historical project involving the early silent movie business in New York.

The backbone of my research is simply a lifetime of reading history. I still devour new books on the Victorian Era and more whenever I see them at my library. That said, when I’m working on a project, there are a lot of little details that have to be nailed down – thank heavens for all the records posted online! Old calendars, baseball schedules, pictures of old jewelry, corset ads, you name it, I’ve spent more time than you’d like to think studying them. And loved every second of it! 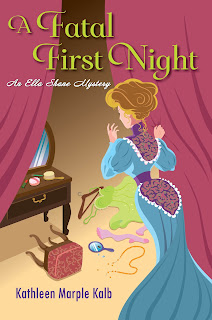 A FATAL FIRST NIGHT – published 4/27/21: The return of swashbuckling opera diva Ella Shane, an Irish-Jewish Lower East Side orphan made good, opens with a murder in Richard III’s dressing room after the premiere of her new production, The Princes in the Tower.  Ella and friends aren't at all sure about their colleague's guilt -- even though it seems obvious. Meanwhile, newspaper reporter Hetty MacNaughten has finally escaped hats to cover a sensational murder trial. And then her British aristocrat beau shows up with more than romance on his mind. Before it’s over, the cast will have to sort out several interlocking mysteries…and find another Richard III. Will everyone survive to the final curtain? 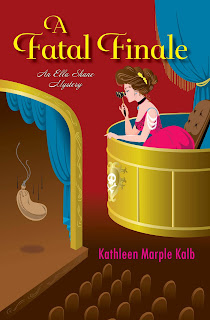 A FATAL FINALE (4/28/20) Ella’s debut, features her singing Romeo when her Juliet dies onstage. The girl’s cousin, a genuine British Duke, comes to New York to investigate and immediately insults Ella – who schools him in a fencing match. Soon, Ella, her “confirmed bachelor” former boxing champ cousin Tommy, and the colorful cast are looking for a killer…and the Duke is hooked.  No spoiler (just tease!) it all culminates in a catwalk duel with the killer – with Ella handling swordplay while the Duke waits in the wings.