The book is available worldwide in digital and print across all platforms. 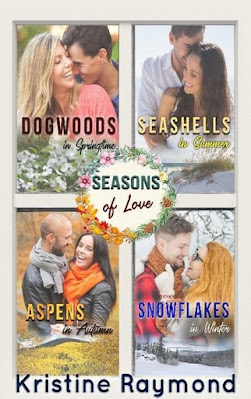 Still in mourning three years after her husband’s death, Caroline Ballard’s solitary life in rural Kentucky is disrupted by a broken water line, of all things. As if the lack of running water wasn’t bad enough, her immediate attraction to plumbing contractor Rick Spencer unearths emotions long thought buried. Opening her heart to love for a second time, a malicious lie told by his ex-wife threatens to end the budding relationship before it begins.

Having adopted her four-year-old daughter, Lily, at birth, Taylor

Brightman is suspicious when former Marine Sergeant Grant Cutler appears on her Nantucket Island doorstep claiming to be the girl’s biological father. Wary of his motives, his good looks and charming personality win her over, but can she trust that she won’t lose custody along with her heart?

Aspens in Autumn
Ramsey Fiorentino is having a bad day. On the run for her life after witnessing a murder, she’s being pursued by none other than Bishop Hamilton, a private investigator hired by the person who committed the crime. When he catches up to her and the truth comes out, they flee to the mountains of Flagstaff, Arizona to hide, but it’s only a matter of time before their newfound romance is tested in the wake of a deadly confrontation.

When New Hampshire State Trooper Alex Ballard becomes stranded during a blizzard in the middle of the night, he seeks refuge at a local bed and breakfast, surprised to discover the owner, Chloe Mancuso, is the sole occupant. A passionate night spent in each other’s arms ignites feelings neither thought possible, but there’s someone else with his eye on Chloe and he’s not willing to share.

Amazon.com: Seasons of Love: A collection of seasonally-themed short stories

Amazon.ca: Seasons of Love: A collection of seasonally-themed short stories

"...each story is drastically different from the others. I enjoyed how each season also had you feeling

their pain and/or adventure.", _ Review by Lisa from Up All Night w/ Books Blog

“The covers reflect the storyline settings, and in the last story a link between the stories is revealed. It was fun "meeting" the characters and they all ended too quickly for me. Any time of the year is a perfect time to fall in love.”, _ Review by Badass Lioness

“I really enjoyed reading Seasons of Love. The novellas were sweet and touching and perfect for reading at the beach! They all had a good storyline, and the writing was well done.”, _ Rachel, Reviewer from BehindClosedDoors Book Review 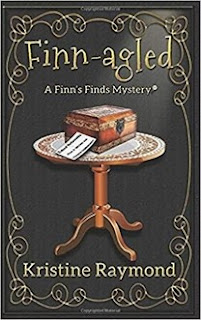 A secret message hidden inside of an antique wooden box, an unidentified dead body, and a mother determined to marry her off to the high school crush whom she hasn’t seen since…well…high school.

There’s no doubt about it; Finn Bartusiak’s life in the seaside town of Port New is about to get interesting.

Coming into possession of a 19th-century, bronze and mahogany writing box under somewhat suspicious circumstances, Finn’s accidental discovery of a coded note leads her and Spencer Dane, bestselling novelist and love of her life (though he doesn’t know it yet), on a quest to unravel the mystery behind the jumble of letters. But they’re not the only ones interested in the cryptic message. There’s a con man on their trail, and he’ll stop at nothing, including murder, to claim the ‘treasure’ for himself. 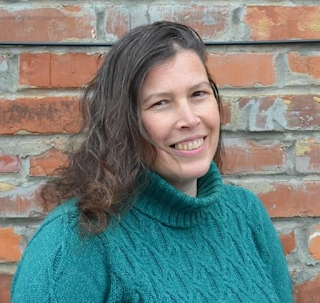 It wasn’t until later in life that Kristine Raymond figured out what she wanted to be when she grew up, an epiphany that occurred in 2013 when she sat down and began writing her first novel. Over a dozen books in multiple genres later, there are a multitude of ideas floating around in her head thus assuring she’ll never be idle.

When a spare moment does present itself, she fills it by navigating the publishing and promotional side of the business. When not doing that, she spends time with her husband and furbabies (not necessarily in that order) at their home in south-central Kentucky, gardens, reads, or binge-watches Netflix.