A Space Opera Set In The StarQuest Saga

The book is available digitally in all platforms! 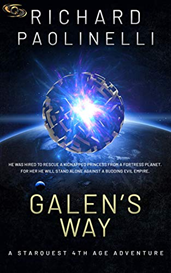 Millions of years in the future, humanity has been driven out of the Milky Way and now calls the Andromeda Galaxy home. Lost in their murky past are the tales of great knights that held the line against the invasion of a dark force until the rest of humanity could escape their doom. The last and greatest of these knights was Galen Underwood.

Long after that heroic stand, a mercenary by the name of Galen Dwyn has been hired to rescue a kidnapped princess. Enticed by a healthy down payment and a chance to settle an old score, Galen accepts the job, only to find out it's a lot more than he bargained for.

Soon Galen finds himself weaving and dodging through a web of political intrigue as the very forces that chase him have set in motion plans that will throw the galactic alliance into civil war.

To his surprise, he also finds that the rescued princess might not be quite the spoiled brat he rescued from the clutches of her keeper.

Accompanied by the princess, his former mentor, and a snarky AI, Galen sets out to find a way to outsmart entire kingdoms, keep the princess alive, and avert the deaths of millions.

Of course, he'll also learn the reasons behind his namesake's chosen path, as he realizes that the only way to win is Galen's way. 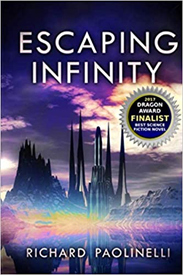 “As we crossed the threshold the temperature difference between the air outside and the building we were entering was slight. But for some reason I felt a harsh, icy shiver travel the length of my spine.  ”Lost on a dark desert highway, Pete Childress just wanted a good night's sleep. Now he must find a way back out of a hotel with no exits and where tomorrow never comes. Worse yet, the fate of a ruined world, and the future of all humanity, hangs in the balance. Working with the lovely, yet mysterious, Hotel Desk Clerk, Liz, and under the ever-watchful eyes of the hotel manager, Pete explores the many mysteries that lay within the walls of The Infinity seeking the answer to the mystery and the way back to the outside world.

“This is an excellent story, with a good amount of thought put into every turn.”_ Alfred Genesson, Reviewer at Injustice Gamer 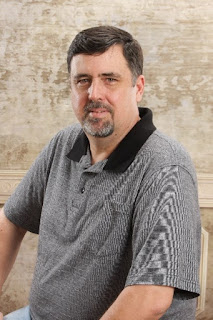 Richard began his writing journey as a freelance writer in 1984 and gained his first fiction credit serving as the lead writer for the first two issues of the Elite Comics sci-fi/fantasy series, Seadragon. In 2010, Richard retired as a sportswriter and returned to his fiction writing roots. Since then he has written several award-winning novels, two non-fiction sports books, and has appeared in several anthologies including eight of the 11-book Tuscany Bay Books’ Planetary Anthology Series and five Sherlock Holmes collections. He also writes a weekly Star Trek fan fiction series, The Calling, on his website, www.scifiscribe.com.

He has multiple novels planned for release this year including the upcoming novel, Galen’s Way, a space opera set in award-winning author John C. Wright’s Starquest Universe and it is due out in just a few weeks. Galen’s Way is the first of six planned novels connected to Starquest that Richard will be writing and releasing over the next two years. He also has three other standalone novels planned for release over the next year.

He also occasionally fills in as a guest co-host here on The Writer’s Block whenever Jim Christina’s horse runs off and leaves him stranded in the middle of the desert.