Happy Birthday and New Release to ME!

It's my birthday so we're changing things up today with

a little reminsecing about one of my favorite series:

launching a NEW BOOK and giving away a FREE BOOK!!

Did you know Gilda came about while I was actually working
as a receptionist in a karate school?
While her adventures are much more exciting than mine, I couldn't pass up the opportunity for a fun cast of characters and some kick ass action!
Did you also know those great karate covers weren't the first incarnation for Gilda's mysteries?
When the first book was first released several years ago, it went through a couple different covers. Personally, I loved the cover and title Death of a Jaded Samurai, but the publisher was torn and we changed it to suit their markets. 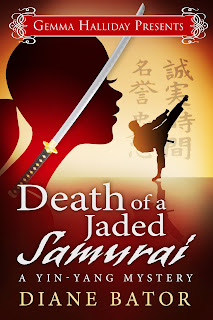 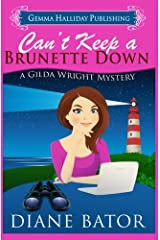 Then I changed publishers to BWL Publishing Inc. and got that great logo! I love the karate positions on the new covers and have had fun with launching 4 adventures. 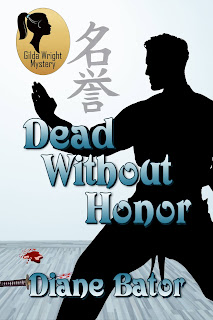 Did you know that my goal for each book, is for Gilda to grow into a more confident woman?
It's true! I also love that her bestie Marion Yearly grows along side her and me with them.
Between the two of them, there's never a dull moment!
When you toss Mick Williams, Kane Garrick, and the rest of the gang at Pheonix Martial Arts into the mix, Gilda's days are never boring.
Then there's Happy Harvey's Hangover Hut and the eternal question:  Should Gilda keep working at the Phoenix school or run for cover behind the front counter of the tiki-infested liquor store?
Even though it's MY BIRTHDAY!! I have a  couple great gifts for YOU!
Number One:  A FREE BOOK!!
All YOU have to do is go HERE to pick it up!
Number Two:  A NEW RELEASE!!
DEAD WITHOUT REMORSE
Find out how Mick lost his hearing and what Fabio gave Gilda that could change the course of her future...
To purchase, simply go HERE!
If you'd like a taste of what's going on in Gilda's world, keep reading...

Gilda fanned her face, glad she’d pulled her shoulder-length hair into a ponytail and melted onto a lawn chair. Sweat trickled from every pore as she groaned. “This weather is unbelievable, especially for mid-September.”

“Hey, I’ll take it. Summer could last another six months as far as I’m concerned.” Marion Yearly, her best friend of many years, handed her a tall glass and a straw across the round mosaic-tiled table. “Here, this’ll help. My famous Lemonade Margarita. Drink it slow, it’s loaded with…”

Too thirsty to heed her warning, Gilda sucked back nearly half a glass of the cold, tangy mixture before an odd taste hit the back of her throat. She scrunched up her face. “What’s in this?”

“I tried to warn you about the tequila.” Marion curled her shoulder-length dark hair over her ears before she topped up Gilda’s glass then raised her own. “Cheers to both of us finally getting an afternoon off to hang out together. Well, aside from karate class this morning.”

“Amen.” Gilda tapped her glass against Marion’s before she sat back. Her best idea of the day so far was to pull on a bikini beneath her shorts and tank top after class.

Maybe she could convince Marion to join her for a dip in Lake Erie later. Considering the sweltering heat, it wouldn’t take much effort, especially after some spiked lemonade.

Her best friend’s backyard resembled a small-town version of the Garden of Eden. Fruit trees, a wide variety of flowers, thick shrubs, and plenty of shade. Gilda felt like she’d gone to paradise without having to board a plane.

Marion slid on her sunglasses before she sat back and breathed out a happy sigh. “How’d you manage to get the rest of the day off anyway? I thought Mick wanted you to work all day and night to get ready for Sandstone Cove’s birthday bash next weekend.”

“Aren’t we supposed to be doing some big demo on the beach and distributing some handouts?” she cut Gilda off.

“Yup, but we’ve worked out most of the details and the flyers are at the printers. Besides, I’ve put in well over my usual hours in the past few weeks. I needed a day off before I strangled someone.”

Marion grinned. “Kane. I heard you two snarl at each other in class.”

“He’s had it coming all week. At least, Kane’s teaching classes tonight, so Mick and I can be alone. Between the new school and the celebration, it’s been weeks since we’ve had time together.”

When she’d first started to work for Sensei Mick Williams at Yoshida Martial Arts, she was ill prepared for what lay ahead, or for falling head over heels for her boss. Her original motivation was to hide from the world behind a desk. To rebuild her shattered self-confidence and ego after a very public breakup with a local police detective.

“Did I tell you how jealous I am you work with the hottest hunks in town? You know that’s the only reason I take classes, right?” Marion adjusted the straps of her yellow tank top before she closed her eyes and settled back with a dreamy smile.

Not only did Gilda know. So did the hunks in question. Marion had a massive crush on Razi Mauli, one of the instructors. He seemed to take her attention in stride. Sometimes, he seemed to enjoy it enough to flirt a bit in return.

“That and you like to watch them grapple in tight shorts.”

“I’ll drink to that.” Marion grinned.

Gilda gazed around the garden. “Do you realize it’s been three months already since Mick shut down the Yoshida school?”

Then he and Razi built Phoenix Martial Arts. Despite the glitch of a murdered referee during their grand opening, membership had soared. Gilda shuddered at the memory of stumbling across yet another body. She never wanted that experience again. Ever.

I WANT TO READ MORE! Buy Link!
Thanks for stopping by! Please check out my website at https://dianebator.ca/
#BWLPublishingInc Dead Without Honor Dead Without Remorse Diane Bator books Gilda Wright Mysteries