Welcome to author Susie Black who has a wonderful sense of humor.

Her author bio alone made me run out to grab her book! I hope you enjoy our interview. 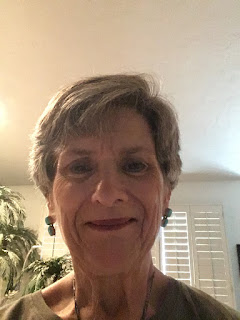 Born in the Big Apple, Susie Black now calls sunny Southern California home. Like the protagonist in her Holly Swimsuit Mystery Series, Susie is a successful apparel sales executive. Susie began telling stories as soon as she learned to talk. Now she’s telling all the stories from her garment industry experiences in humorous mysteries.

She reads, writes, and speaks Spanish, albeit with an accent that sounds like Mildred from Michigan went on a Mexican vacation and is trying to fit in with the locals. Since life without pizza and ice cream as her core food groups wouldn’t be worth living, she’s a dedicated walker to keep her girlish figure. A voracious reader, she’s also an avid stamp collector. Susie lives with a highly intelligent man and has one incredibly brainy but smart-aleck adult son who inexplicably blames his sarcasm on an inherited genetic defect.

Looking for more? Reach her at mysteries_@authorsusieblack.com

Side note:  Just behind my college graduation, wedding day, and birth of my son, June 9th was truly one of the most amazing days of my entire life. My debut cozy mystery Death by Sample Size was released for publication. I am humbled, honored, and proud to be able to say that now I am officially a published author! A life-long dream has come true, a hard-fought- for goal has been accomplished.

Like the protagonist in Death by Sample Size, I am a Los Angeles-based sales exec in the ladies’ swimwear industry. I am married to a highly intelligent man who still makes me laugh every day and have one adult irreverent son who is a linguistic Psychologist. I am a college graduate and speak, read, and write mid-level Spanish; regrettably, with absolutely NO accent whatsoever. I am a dedicated walker, voracious reader, and have been a stamp collector since childhood.

I do. The second book in the Holly Swimsuit Mystery Series is in editing stage right now. It may take a bit longer than originally planned as I am contemplating adding a new continuous character, a pet, and the hint of a love interest for the protagonist.

What was the most difficult section/piece you ever wrote?

The most difficult section I ever wrote was the middle of the story. What made it difficult? It was difficult because there were two potential versions that I liked equally, but choosing one over the other would have an impact on how the story ended. I solved my dilemma by allowing the characters to control the middle of the story and drive the plot to the end. I figured if the book was a nuclear bomb, I could blame the characters…LOL! So far, the reviews have been excellent and the characters haven’t stopped bragging how they are responsible for how successfully the book has been accepted. Believe me, these characters are getting a swell head.

Since all my stories take place in the sane industry I am actually in, my every day work is the main source of my research. People in my industry and everyday life situations are my best sources of research. I have kept a daily journal during the course of my entire career where I chronicle the quirky, interesting, sometimes challenging people I’ve encountered and the crazy situations I’ve gotten myself into and out of. All my characters and plots are based on the people I’ve met and the situations I’ve been in, using a good deal of poetic license of course.

Which books and authors do you read for pleasure?

I tend to read books and authors in the humorous cozy mystery genre, the same genre I write in. Is there an author who inspires you? I have been inspired by many authors, but if I had to choose one that inspired me the most, it would be the late, great Joan Hess. Her irreverence and wise-cracking way of commenting on society’s foibles via her characters is something I have emulated.

Yes, there were several. My maternal grandmother, my dad, and my high school journalism teacher. 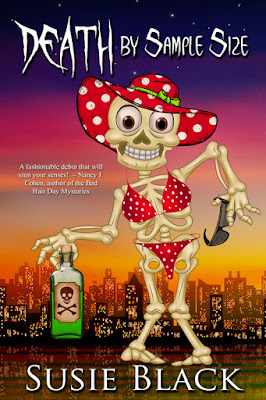 Everyone wanted her dead…but who actually killed her?

The last thing swimwear sales exec Holly Schlivnik expected was to discover ruthless buying office big wig Bunny Frank’s corpse trussed up like a Thanksgiving turkey with a bikini stuffed down her throat. When Holly’s colleague is arrested for Bunny’s murder, the wise-cracking, irreverent amateur sleuth jumps into action to find the real killer.  Nothing turns out the way Holly thinks it will as she matches wits with a wily killer hellbent for revenge. Get ready to laugh out loud as Susie Black’s Death by Sample Size takes you on a rollicking adventure ride through the Los Angeles apparel industry.

When the elevator doors opened, I had to stop myself short not to step on her. There was Bunny Frank-the buying office big shot-lying diagonally across the car. Her legs were splayed out and her back was propped against the corner. Her sightless eyes were wide open and her arms reached out in a come-to-me baby pose. She was trussed up with shipping tape like a dressed Thanksgiving turkey ready for the oven with a bikini stuffed in her mouth. A Gotham Swimwear hangtag drooped off her lower lip like a toe tag gone lost. Naturally, I burst out laughing.

Before you label me incredibly weird or stone-cold, let me say genetics aren’t all they’re cracked up to be. If you’re lucky you inherit your Aunt Bertha’s sexy long legs or your father’s ability to add a bazillion dollar order in his head and get the total correct to the last penny. Without even breaking into a sweat, it’s easy to spout at least a million fabulous traits inheritable by the luck of the draw. Did I get those sexy long legs or the ability to add more than two plus two without a calculator? Noooooooooo. Lucky me. I inherited my Nana’s fear of death we overcompensated for with the nervous habit of laughing. A hysterical reaction? Think Bozo the clown eulogizing your favorite aunt.

I craned my neck like a tortoise and checked around. Then I clamped a fist over my mouth. Cripes, how could I possibly explain my guffaws with Bunny lying there? The disappointment was simultaneously mixed with relief when there was no one else in the parking lot. Where was security when you needed them?

I toed the elevator door open and bent over Bunny. I’d seen enough CSI episodes to know not to touch her. She was stiff as a board and I attributed the bluish tinge of her skin to the bikini crammed down her throat. I was no doctor, but I didn’t need an MD after my name to make this diagnosis. Bunny Frank was dead as the proverbial doorknob.

In case you’re like me and can’t wait to read more….