August 09, 2013
Okay, I'm a little slow on catching on, but here we go!
My publisher, Books We Love, does a segment called "Just A Few Lines" where my fellow authors send each other blurbs from their novels and they, in turn, post it to their own blogs to help promote each other. Here, for your reading pleasure, are a few lines from Janet Lane Walters novel Shattered Dreams.....
Without a glance at the waiting patient, she strode to the counter. The aroma strengthened. Hadn’t been her imagination. She turned her head and stared at the man wearing the green cotton examining gown. She gripped the edge of the counter. Blood rushed from her head.


“You’re dead.” The words slashed the silence. This couldn’t be happening.


The voice sounded like the one from her dreams. She opened her mouth to ask where he’d been and what he’d been doing for the past twelve years. She sucked in a shallow breath. Asking that question would only stir the emotions she had frozen.


Her fingers had no feeling. Waves of darkness dimmed her vision. The edge of the counter disappeared. Her knees buckled. Blackness engulfed her.

“Manon!” Rafe Marshall leaped from the examining table in time to catch her before she hit the floor. He cradled her against his chest. “Didn’t mean to scare you,” he whispered. Why did she think he was dead? He knew news of his accident had been kept quiet because the police believed he’d been deliberately forced off the road. Who had told her? Had the informant been the driver of the dark car his rescuer had seen speeding from the scene?
Find Shattered Dreams here.
http://www.amazon.com/Shattered-Dreams-Moonchild-ebook/dp/B00DPZT6K2/ref=sr_1_4?ie=UTF8&qid=1375877610&sr=8-4&keywords=Janet+Lane+Walters
Janet can be found daily at http://wwweclecticwriter.blogspot.com/
Stay tuned. Next week Just a Few Lines features Jane Toombs 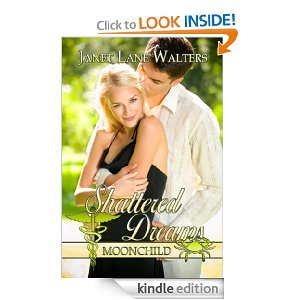