Happy Fall to you all,
Summer in Southern Ontario was hot and sunny with breaks of cold and rainy. For now though, we've settled into cooler fall weather and waiting for the leaves to change color and collapse in exhaustion from this crazy year we've had so far!
September's question for all the Round Robin Blog Fest authors is:  Most novels have an easily understood point to make to the reader, do your stories ever have more subtle or intuitive themes?

My first thought went straight to this oldie but goodie meme that we've all heard before: 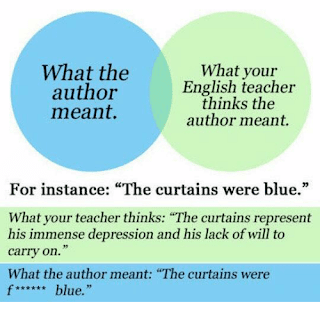 Sometimes a blue curtain is just a blue curtain.
A brown dog is just a brown dog.
Most of the time, I write my novels without a planned message or underlying theme.
BUT most of the time there actually is an underlying message in novels whether they are planned or sometimes subconscious to the writer then they create the first draft. These remind people to hold their families close, that friends are important, or to take care of themselves.  Even a lot of sci-fi and fantasy novels carry messages about the establishment and justice or the hazards with having fire-breathing dragons.

Women who are down but not out and find their way out of bad situations. That seems to be my ongoing theme for most of my series. Like Gilda in my Gilda Wright Mysteries, they may face dark days but they will always come out fighting, or at least crime solving. While I don't focus on things like blue curtains, I show the ways the women rebuild and empower themselves whether it be through martial arts, running a business, or in Lucy Stephen's case in The Mystery Lady, becoming a mystery writer.
Gilda Wright started off as a "weak" person who becomes stronger with each mystery and each karate class she kicks her way through. Even when she has her down moments, she fights back and never gives up. Her whole reason for getting involved with karate was to empower herself when her boyfriend (Jason Thayer) cheated on her. Now that she's more confident and a stronger person, he's been trying to win her back while she is also getting to know Kane Garrick and dealing with secrets her boyfriend Mick Williams is hiding.

Laken Miller, in All that Sparkles, book one of my Glitter Bay series, is a former model who became ill and had to start her life over. Like Gilda, she seeks to rebuild her life from the ground up after a nasty divorce and a bout with cancer. She is lucky to have fame and money to use to her advantage, but many things she's had to deal with don't require money. Like dealing with her free-spirited sister.

Audra Clemmings in Drop Dead Cowboy has already raised her kids, built her business, but things keep popping up to knock her back down.
So where did this drive to write about resilient women come from? I was raised by them!
My mom rebuilt her life after separation from my dad.
My amazing grandma who passed Sept 1, 2020, lost her husband over 30 years ago and took driver's training with me in her late 50s!
With such great role models, what else would I write about? 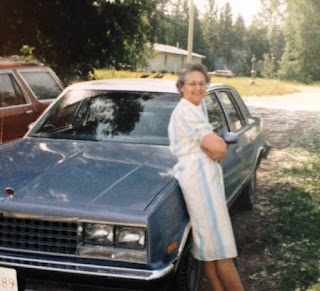