A former journalist and magazine editor, Judy Penz Sheluk is the author of two mystery series: the Glass Dolphin Mysteries and the Marketville Mysteries. Her short crime fiction appears in several collections, including The Best Laid Plans and Heartbreaks & Half-truths, which she also edited.

Judy is a member of Sisters in Crime, International Thriller Writers, the Short Mystery Fiction Society, and Crime Writers of Canada, where she serves as Chair on the Board of Directors. Find her at www.judypenzsheluk.com.

I research every small detail in my books. And when I say every small detail, I mean it. In my current work-in-progress, there’s a scene set at Toronto City Hall on New Years Eve, 2008. I fact-checked the weather conditions for that night (cold with blizzard-like conditions) and wrote that into the story.

I attribute this obsession (because that’s what it is) to spending the 15+ years as a journalist and magazine editor. But my background also makes me very comfortable with contacting strangers who are experts in their field, and knowing the right questions to ask, and I’m certainly not opposed to grilling my family. In A Fool’s Journey, for example, all three of my nieces were invaluable resources. Niece Ashley for her in-depth knowledge of tattoo parlors, Rebecca, a social worker, for her insights into parenting styles, and Leah for the perfect setting for a gallery in Burlington, where she lives. I suppose you could say my biggest strength is in building a world for my characters to live in.

When I’m working on a new project, I try to write every day, seven days a week, holidays included, and if I’m not writing, I’m researching or editing what I’ve already written. But in between projects, when I’m getting ready to launch a new book, and I’m mired in marketing, blog tours, and social media blitzes, I tend to take a break. That might last as long as a month, but never longer, because I crave writing the way someone might crave chocolate or potato chips. As for a strict routine, nothing could be further from the truth. If it’s a nice day in the summer, I’ll golf in the daytime, and (maybe) write for an hour or so in the evening. If it’s a rainy or snowy day, I might work for 10 or 12 hours straight. But no routine, that’s a creativity killer for me. I can’t even participate in NaNoWriMo because having to write 1,666 words a day (or any set goal) makes it seem too much like work.

If someone had told me, in July 2015, when my debut novel, The Hanged Man’s Noose, came out, that five years later I’d have five (soon to be six) published novels, not to mention my own publishing imprint and the anthologies, I would never have believed it. So, I don’t know where I’ll be five years from now, but I hope I’ll still be writing and loving it. I’d also like to take a course in playwriting at some point. We’ll see.

I always answer this question with a quote from Agatha Christie: “There was a moment when I changed from an amateur to a professional. I assumed the burden of a profession, which is to write even when you don’t want to, don’t much like what you’re writing, and aren’t writing particularly well.”

That they stayed up all night reading, that they couldn’t wait to recommend it to a friend, or to their book club, or simply that, they forgot about their own worries, if only for a little while.

Two novels: a standalone suspense and the prequel to Skeletons in the Attic, set in 1976 and told from the perspective of Callie Barnstable’s mother, Abigail. Both are in the early stages of development, as I’ve been getting ready to launch Where There’s A Will, book 3 in my Glass Dolphin series, for November 2020 release. But I am really keen to dig into both. For the prequel, I’ll probably have to reread Skeletons. It’s been five years since I wrote it and I’m sure there are small details I’ve forgotten. Wouldn’t do to get those wrong! 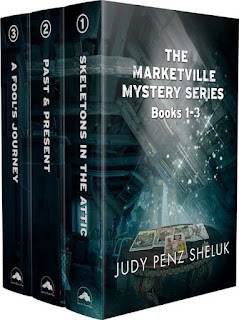 Calamity (Callie) Barnstable never dreamed that one day she’d be solving cold cases in the small town of Marketville, but that’s exactly where life has led her. Turns out, she’s got a flair for digging up the truth—even when the truth wants to remain firmly in the past.

The first three books in the bestselling Marketville Mystery series, now available in one collection.

Skeletons in the Attic (Book 1):

Calamity (Callie) Barnstable isn’t surprised to learn she’s the sole beneficiary of her late father’s estate, though she is shocked to discover she has inherited a house in the town of Marketville with one condition: she must move to Marketville, live in the house, and solve her mother’s murder.

Callie’s not keen on dredging up a thirty-year-old mystery, but if she doesn’t do it, there’s a scheming psychic named Misty Rivers who hopes to expose the Barnstable family secrets herself. Determined to thwart Misty and fulfill her father’s wishes, Callie accepts the challenge. But is she ready to face the skeletons hidden in the attic?

It’s been thirteen months since Callie inherited the house in Marketville. She solves the mystery, but what next? Unemployment? Another nine-to-five job in Toronto?

She decides to set down roots in Marketville, take the skills and knowledge she acquired over the past year, and start her own business: Past & Present Investigations. It’s not long before she gets her first client: a woman who wants to find out everything she can about her grandmother, Anneliese Prei, and how she came to a “bad end” in 1956. It sounds like a perfect first assignment. Except for one thing: Anneliese’s past winds its way into Callie’s present, and not in a manner anyone—least of all Callie—could have predicted.

In March 2000, twenty-year-old Brandon Colbeck left home to find himself on a self-proclaimed “fool’s journey.” No one—not friends or family—have seen or heard from him since, until a phone call from a man claiming to be Brandon brings the case back to the forefront. Calamity (Callie) Barnstable and her team at Past & Present Investigations have been hired to find out what happened to Brandon and where he might be. As Callie follows a trail of buried secrets and decades-old deceptions only one thing is certain: whatever the outcome, there is no such thing as closure.