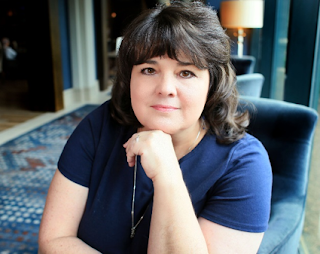 Colleen Baxter is a simple college professor and former paleomammalogist. I like to incorporate extinct animals and biological tidbits in my writing. I have five children, spanning the ages from 10 - 37 (the younger three are adopted). When I am not grading lab reports or cooking for my family, I am dreaming of worlds far away and writing about them.

I think my strengths are my scientific knowledge and dialogue. I try to make sure each character has a distinct voice that comes through in their speech and interactions.

I write every day, although I will sometimes take off a week or so to decompress between projects. I try to get my teaching work (grading, etc.) done in the morning which frees up the afternoon for writing. On the weekends I tend to work on my writing all day.

Ha! Still writing, though hopefully able to put teaching aside and work full-time as a writer.

Just write. You should always have a project in your mind that is struggling to get out. No matter how hard it is to get the words on paper, just write.

Hmmm. I think when I hear someone say they were totally lost in the world, that is the best thing. To think that I managed to put this thing together that can actually transport someone away from their life for a little while is pretty special.

Currently, I am working on a science fantasy that is a bit of a departure for me. My science fiction trilogy is about to be released, so lots going on! 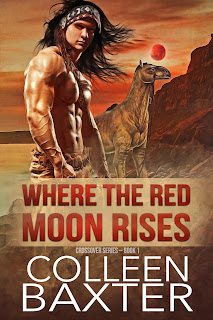 WHERE THE RED MOON RISES

The last thing Tara Allen remembers is a wall of water slamming into her research vessel, then icy darkness. She awakens on an unfamiliar shore in a world far away—in time and place—from her Long Beach, California home. But Tara is not alone in this strange new world, a primitive place where ancient cultures thrive and long extinct animals roam the land. And the golden-eyed man who rescues her has secrets of his own.

Aleyx Petrov lives in exile from his own people. He can help the beautiful stranger heal, teach her to survive in his world, but he doesn’t dare grow too close to her.  Any link to him might taint her in the eyes of his people.  Yet when Tara, too, is cast out, it is Aleyx who shelters her once again.

But Tara’s arrival hasn’t gone unnoticed. Others have crossed into Ixtlán before her. Others who are on the brink of war, willing to do whatever it takes to gain the knowledge that Tara doesn’t know she possesses. How can Aleyx protect Tara from this rival faction, when his own people reject him? Can the fragile new love Tara has found replace all that she’s lost, or is it doomed to come to a tragic end in this unearthly world where the red moon rises?

To buy WHERE THE RED MOON RISES: 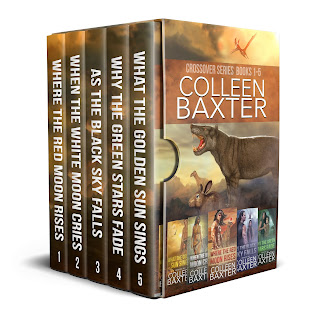 Beyond the boundaries of space and time lies Ixtlán. Sometimes Earth bumps into this strange world, allowing things to crossover into a dangerous and primitive place where ancient cultures thrive and long extinct animals roam the land. People are caught in the crossover as well. The descendants of Tsumat Indians, Spanish conquistadors, English travelers, and Russian fur traders live and love and battle on Ixtlán . Prehistoric beasts such as chalicotheres, oreodonts, and hyaenodons live beside pterodactyls. Modern Earth dwellers are dragged through the treacherous portal into Ixtlán as well. And all of them are threatened by arrivals from another mysterious world.

And yet, in this perilous world, there is love to be found, though never without a fight. A woman from California must battle for survival beside a man outcast from his tribe. Can a spoiled son of Éspan earn the trust and love of a Tsumat woman who needs no one? A young man obsessed with adventure is called upon to assist a Sky Lord. Will his quest bring death, or his heart’s desire? A cataclysmic volcano blast brings together others, while a despairing EMT newly crossed over from Earth must discover if love is the best medicine to mend a tattered heart.

As old conflicts and rivalries rear their ugly heads, only the courageous can survive. It doesn’t matter when or how they crossed over into Ixtlán. In a place where death is always just a breath away, the bonds of friendship and family and love will be their only hope.

To buy the CROSSOVER SERIES BOXSET: