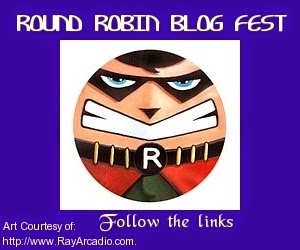 Welcome to April's Round Robin Blog Fest!!
Hope you like our new photo. I wasn't going to participate in this month's blog circle due to an abundance of activities going on in the "real world," but here I am!
This month's topic is:

You loved the blurb. First page sounded interesting. You bought the book. What makes you throw the book you're reading across the room, stomp on it, and go find another?

I have read two novels that I've grown frustrated with. One at the beginning of the book, the other at the ending. Both were "critically acclaimed," but not books I'd ever recommend.

The first was The River King by Alice Hoffman. While I loved the idea of the story, the actual plot itself was difficult to follow. Just as the reader is absorbed into the thoughts and story of one character, another character passed by and we'd hop into his head, then he'd pass a neighbour sitting on her front porch and we'd hop into her head, suddenly a dog ran past and we ran along the river barking at a duck. No focus. No explanation, just continuous head-hopping as the story flowed along like the river outside the Haddan School. Apparently, this meandering form of storytelling is a tendency of Hoffman's and one reason I don't read any more of her work.

The second book was one I read recently, Triggers by Robert J. Sawyer. I have to admit, I read this one for a local "One Book, One County" program. I even paid for it, met the editor who helped publish it, and will get to meet the author next month at a wind up party. While I normally don't read much in the sci-fi genre, Sawyer's writing is crisp and clean and, up until the bitter end, I actually enjoyed the book.

Then came Chapter 50. Without giving away the ending, the book lost all the credibility for me. Up until then, I'd suspended all doubts and enjoyed the plot, characters, and plausibility.

I didn't throw the book against the wall, as much as I wanted to. I did vent to my other friends who'd already read the book and came away with the same impressions I had. The ending of Triggers was a cop-out.

I have read books-traditionally published as well as self-published-that have broken several "rules" but still tell a great story. I've also read books that should have had a few more solid edits before being released to the general public. So what turns me off a book?
* If I have to work too hard to weed the story from miscellaneous, unnecessary information.
* I have to suspend all belief at the end of a really good novel to accept a "feel-good" ending.
* Dialogue tags for a character that are a paragraph away from the dialogue.
* If, as in one book I read, an entire chapter is devoted to character and a situation that has nothing to do with the story whatsoever.
* I can't stand the main character and want him/her dead by the end of page 3.
* The plot is totally unbelievable. I'm not slamming fantasy or sci-fi novels here. Sometimes novels that aren't realistic can still become believable. Stephen King novels, Dracula, even The Hunger Games, are all "unrealistic" novels I can read and manage to temporarily suspend all disbelief to become part of their worlds. Twilight, not so much.
* The ones I hate the most: Books written and/or edited by people who cannot write or edit. Don't get me wrong, I'm not a book snob! I love to read new authors, up and coming authors, and anything my friends have written. I'll gladly read anything once and will happily promote and review those books I love. I know how hard it is to follow your dreams to write and edit books and I have learned a great deal working with my friends, my agent, and my publisher!

To all my fellow writers:  Don't Give Up! Fiona McGier hasn't! Click on her name to visit her blog and find out what books she's thrown against the wall!

Our participants in the Round Robin Blog this time around: