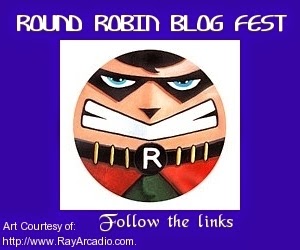 Welcome back to another edition of the Round Robin Blog Fest!
I've been absent from the tour for a bit due to other obligations, but now I'm back!
This month's topic is: What glues you to a story start to finish? And/Or what hooks do you use to capture your readers?

What glues me to a story from start to finish are great characters and a plausible story line. If I'm not hooked into a book within the first page, I will put it aside - or toss it across the room as in some cases. Rarely do I force myself to read on unless someone has already read it and tells me it is worth it. Usually, it's not.
A plausible story line to me is something that, while it may be a bit far fetched, could be possible. Improbable Possibility refers to a situation that is a possibility in the real world, but is extremely unlikely. A lot of movies thrive on this, particularly the older James Bond movies.
I also appreciate a good story where I don't have to hunt to follow the story line. One of my least favorite books was The River King by Alice Hoffman which tended to meander like a river. Jumping from one character to another, including a dog, the book made for a very difficult read in what should have been a really good story.
What hooks do I use to capture my readers? I decided the best way to tell is to show. Here are some samples of my hooks and the books they are in:

"I directed traffic and tried to ignore the wailing from up the beach. The crime lab boys arrived via Ken Allured’s fishing boat about half an hour ago. They kept busy doing their thing, which included scraping finger nails and collecting everything on the island that looked suspicious. Well, everything except me." - from Murder on Manitou, Wynterblue Publishing.

"Danny Walker fought the urge to grab Paulina. Rather than get directly involved, he leaned against the back wall of Gerard Maddox’s home office while she swayed and clutched the arm of the chair next to her. Her face, perfectly made up, was as pale as her platinum hair. She stared at her champagne flute, apparently unable to swallow another mouthful. Considering the conversation that floated around her, he hardly blamed her." - The Bookstore Lady, Books We Love Ltd.

"Danny awoke to a cool draft and snuffling near his face. Images flashed through his head sleepy mind. Sitting in an overheated car, a drive through the country, scraping old paint off walls, falling asleep in a dusty sleeping bag at three o’clock when he could no longer keep alert. Finally, he remembered falling asleep in the old sleeping bag at the old Victorian house he’d purchased last month.
Only now he wasn’t alone." - The Mystery Lady, Books We Love Ltd.

"After taking a lukewarm shower then rummaging for clothes that would pass for clean, Leo Blue opened the curtains and groaned. More snow. The fir trees along Main Street blossomed with colored lights and lamp posts stood adorned by wreaths. Christmas had taken the small town of Packham by storm overnight, but in his opinion the holiday ranked right up there with root canals and broken ribs. He should have fled to Tibet right after Halloween." - The Bakery Lady, Books WeLove Ltd.

"Gilda’s cell phone vibrated next to her plate, making the ice in her half-full water glass dance. She groaned, her stomach churning, as it had all week. “Not again.”" - Can't Keep a Brunette Down, Gemma Halliday Publishing.

When Sensei Mick Williams dreamed, he dreamed big—much to the chagrin of his receptionist Gilda Wright. After spending a late night designing fiery logos for the new Phoenix Martial Arts school and printing off scorecards for Mick William's MMA extravaganza, Gilda had fallen asleep on top of her covers with nightmares of martial arts clip art coming to life and chasing her through the new training hall. - Hard-Headed Brunette, Gemma Halliday Publishing.

Thanks for joining me on my blog today! You can find all my books (except Murder on Manitou which is out of print right now) on Amazon and my fan page on Facebook.

Hope you pop over to check out Ginger Simpson's blog and the other great authors joining us this month!