This month's Round Robin Topic is:  Do you believe in angels, spirits, ghosts, demons or other ethereal beings or locations? What do you think when they appear in stories? Have you used them in your own stories?

Wow! Hard to believe it's already that time of year again. Halloween is one of my favorites. Every year I am involved with a Haunted Dojo (basically a fun Haunted House, but built in a karate school) and get to meet and greet dozens of trick-or-treaters. I love the magic of the holiday as well as the way we are able to suspend all belief in the way things "should be" for "what is possible." Including how we are more willing to think about spirits, ghosts and demons, even for just a couple of days.

I used to love to read stories of the paranormal and have actually edited a couple. A well written book of any sort can get me to suspend all belief in reality. Something spooky and logically done, could totally convince me it is all real. I have read one or two that made me want to keep the lights on at night. One of which was written by my friend Richard Goodship called "The Camera Guy."

While I have never used ghosts or demons in any of my own stories, I am currently writing a cozy mystery with a psychic as one of the minor characters. Watch for "Life is Better Brunette" coming out in Spring 2016!

And now for my own ghost story....

My mother-in-law passed away in October 2013 a day before my kids and I were meeting up with family in Collingwood, Ontario. Since it was difficult for us to get away to attend Grandma's funeral 2,000 miles away, we held our own memorial on the shores of Lake Huron with Grandma's favorite Tim Horton's coffee and timbits (donut holes!) We also bought a bright green star balloon to release over the lake as we said our goodbyes.

The kids and I made a circle, said our goodbyes and released the full-to-bursting helium balloon to the elements. To our surprise, it didn't sail off into the sky as we expected. Instead, the balloon sank to the ground and bobbed toward the highway. We all started to laugh and cry at the same time. Grandma had a notorious bad sense of direction as well as being a bit of a joker and it seemed she wanted to get in one last laugh. We all shouted to the balloon - and Grandma - that she was going the wrong way and needed to go up over the lake into the sky. No word of a lie, the balloon did a 180 degree turn and rose up over the lake then disappeared into the clouds.

We tried again the next year on Mother's Day to launch one more balloon in her honor. My youngest son clutched the balloon in his hands, the long ribbon tied so tight around his hand he nearly cut off circulation. As we walked from our home to our launch site, a gust of wind came up out of the blue and ripped the balloon off the ribbon and right out of his hands. He was nearly in tears as we watched the balloon sail off over the trees and into the sky. Then we burst out laughing. Grandma was never one for sitting around feeling sad. She would have preferred to go for an ice cream cone and make the best of things.
Which is exactly what we did...

Have a wonderful, wonderous Halloween and make your way over to visit Beverley Bateman to see what she has stirred up on her creative cauldron!! Be sure to check out the rest of our amazing authors as well! 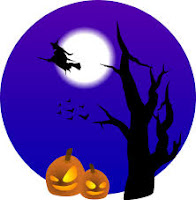