Barbara Trendos writes about her father's war experiences in Survival 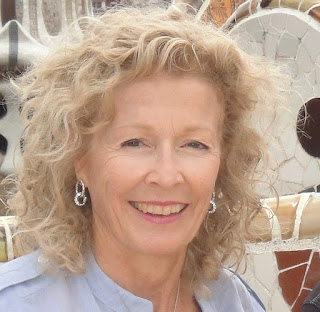 Barb Trendos is Toronto born and raised, although now living in Uxbridge with her husband and bunny. She became a writer quite accidentally, starting out as an avid reader. She spent many Saturday morning hours as a child with her mom and sisters in the 'reading pit' at the North York Public Library discovering Charlotte's Web, Paddington Bear, The Children of Green Knowe, Pippi Longstocking to name but a few.

The seeds of inspiration for Survival were first sown in Barbara in the 1980s when her father, Albert, casually shared the contents of an old file folder he had discovered amongst his mother’s belongings after she passed away. To Barbara, it was a treasure trove: fragile letters that Albert had written home while he was a prisoner of war; official Air Force telegrams and correspondence that variously reported Albert as MISSING, then as a POW, and finally LIBERATED; dog-eared black and white snapshots that begged identification of people, time and place.

Barbara was hooked, and realizing that she knew only the highlights of Albert’s wartime story, naively undertook to fill in the gaps, to what end even she didn’t know.

Most difficult piece written and why

The piece in my World War II based book that I found most challenging to write was the chapters on the two forced marches that took place in early 1945 during the final months of the war in Europe. The Russian army was closing in and the writing was on the wall for Germany. It was a stressful and dangerous time to be a prisoner of war. Even though the men (my dad included) were Allied officers and  somewhat protected by the Geneva Convention, desperate times called for desperate measures, and the German authorities in charge of Stalag Luft 3 were indeed desperate men. Rumours abounded and ranged from the Germans abandoning the camp and the prisoners to save themselves, to the Germans killing all the Allied prisoners.

To me, the two forced marches, January 27, 1945 to May 2, 1945, were, and still are, one of the least known aspects of World War II. Many of the stories from this period are heart-wrenching and undocumented: the men were evacuated from the camp at short notice in the middle of the night, on foot in one of the coldest winters on record; the men could take only what they could carry (food included); the men were hungry from the get-go due to cut rations in the preceding months; the Germans had made no provision to feed the men or accommodate them at night, so sleeping in ditches, huddling together for warmth, eating crusts of frozen bread, and secretly bartering with the local folks were the norm. Worst was the constant fear and often reality that all their years in a prison camp were going to end in death before they could be liberated.

- listening to my dad speak about his wartime experiences through the Memory Project, an insightful educational initiative that offers veterans and Canadian Forces staff an opportunity to share their service experiences with students, communities, and anyone who wants to hear

- reading transcripts of talks my dad had given

- networking with other ex-prisoners of war

- talking to researchers at Pier 21 (Canadian Museum of Immigration) regarding Dad's transport overseas in 1942, and home after liberation in 1945

During the time I was writing my book (and still), many of my favorite books tended to be either historical novels or memoirs set in World War II that told well-researched stories from different perspectives:

All the Light We Cannot See, Anthony Doerr

Allyson Latta, a writer, editor and workshop/retreat organizer. I met Allyson locally in Markham when I attended one of her writing workshops. She later invited me to attend one of her annual writing retreats, this one in Tucson, Arizona, where I met and exchanged ideas with other writers, shared my work and process, gained confidence. Once I had a draft manuscript, Allyson introduced me to a group of Beta readers who offered me valuable feedback and insights, many of which sent me back to the drawing board to revise, revise, revise. Everything they contributed made my book better, albeit often with a lot of extra work from me (but it was good to have the kick to do it).

Strengths as an author

- Plain language writing, once I decided my book audience would be targeted to young people/high school students

- Tenacity for getting to the bottom of my dad's memories. By that I mean getting beyond his "remembered truth". After all, he was well into his eighties by the time I was writing his story, so I forgave his memory lapses. Or, the things he simply thought he remembered, when he had in fact only read them, being a voracious reader of all things World War II, RCAF, Stalag Luft III (the prison camp in Germany), The Great Escape

Nothing structured, perhaps because when I began writing my book, I didn't know it would actually become a book. (I didn't know HOW to write a book!) Also, I was still working full-time and could write only in my spare time, of which, oddly enough, there never seemed to be enough. Once I retired, I was able to commit to more "regular" writing, albeit still a hodge podge. 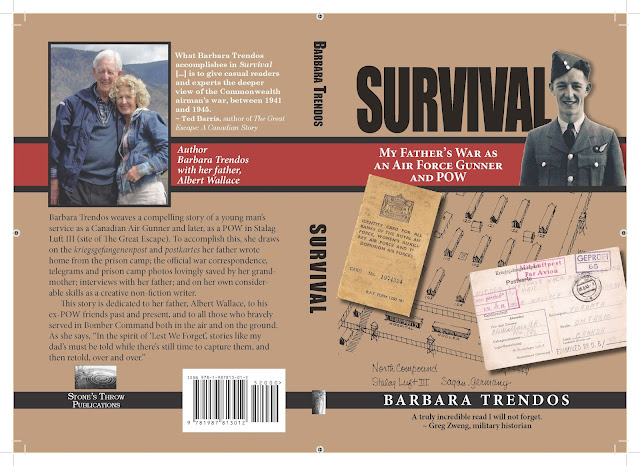 SURVIVAL: My Father’s War as an Air Force Gunner and POW is Flight Lieutenant Albert Wallace’s wartime story, uniquely written in the style of a journal, by one of his daughters, with his collaboration.

They weren’t all flying aces or famous escapers or tunnelers. And they weren’t all decorated for heroism or distinguished military service either. Most were simply ordinary heroes: sons, brothers, husbands, fathers, friends. Young men (and women) who felt strongly enough about doing the right thing to voluntarily sign up to defend their country’s freedom and democracy against the unthinkable evil of World War II. And against the odds, lived to tell about it. Albert Wallace, a Canadian young man from Toronto, was one of the lucky ones.