Welcome back to one of my favorite authors, Ileana Munoz-Renfroe! 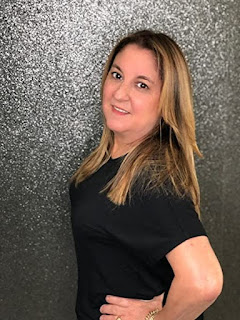 For the longest time, Ileana Muñoz-Renfroe wanted to be an author. Almost twenty years later, and after raising two children and owning numerous businesses, she decided to take the plunge.

About a year ago, as she sat in a Café in Paris, the idea of Rosa popped into her head, and the stories and characters became real. Since two of her passions are the paranormal and high-end fashion, she found a way to combine them and created Rosa the Cuban Psychic Mysteries. This series brings together her Cuban and American culture to make for a fun cozy mystery story.

She is hard at work on writing a spin-off to Rosa the Cuban Psychic Mysteries and a brand-new series involving the character Candeedo Brewdinkle.

When she is not writing, she enjoys traveling, reading, entertaining, and listening to music.

What would you write if you knew you couldn’t fail?

If I knew I could never fail I would write romance novels. Who knows maybe someday I will try writing a romantic comedy.

How do you know when your story is finished?

I know my story is finished when my characters tell me. I listen to them as they are always talking to me and directing me where to go next.

Do you write part-time or full-time?

How long on average does it take you to write a book?

On average I would think it would take me a few months. However, because of health issues, I needed to stop writing after I launched A Fashionable Fate. I am happy to say that I am back to writing and hope to write at least 5 books this year.

What is the most difficult part of your artistic process?

The most difficult part of my artistic process is making the story flow. I have ideas constantly floating in my head. The problem is articulating them in such a way that makes the story fun to read.

What is your next project?

Wow, my next project. I have so many right now. Let's see... I am finishing up book 2 of Rosa The Cuban Psychic Mysteries - A Parisian Bait will be due out in April of this year.

I have a new series - book 1 of Candeedo Brewdinkle Mysteries that should be ready for the editor soon. Candeedo a retired spy is living quietly in a quaint small town with his companion Bartholomew (a sphynx). In book 1 they arrive at the local bookstore to find the owner missing and a dead body with the book Candeedo is supposed to have picked up. The missing piece is the bookmark which had a Cesear Cipher Code and one he needed in order to complete his task. You see he really is not retired...

I am also working on another new series A Tarot and Caravan Mysteries. In book 1 Abuela Nana from Rosa The Cuban Psychic Mysteries has decided she needs a break from La Misteriosa Cafe on Colten Island. After a difficult year of being poisoned and almost dying she decides to buy a vintage caravan and join her Cuban friends on a year-long expedition. What Abuela Nana does not realize at first is that the vintage caravan she just purchased comes with an unexpected guest.  Matilda, a gypsy who used to read crystal balls.

Then, I'm also working on book 2 of Gizmo Adventures. In this new addition Gizmo and the family go on their first trip to the beach. (By the way, I decided to dabble into children's books because I'm going to be an Abuela and thought what a great gift to my son and wife. Since the baby is not due until March and they don't know if it's a girl or boy I cannot name a baby in these books yet.) So, for now, I am not sure if it will be a boy accompanying Gizmo or a girl. This book will be out by April. 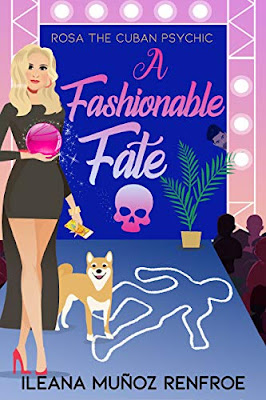 This is not what Boutique owner, Rosa de los Reyes hoped for when she organized the Colten Island Fashion Show.

To save the gala and stop the killer from striking again, Rosa must use her psychic abilities, sift through the gossip at La Misteriosa Café and navigate increasing danger all while racing against the clock.

Will Rosa, her familiar Raul, and Las Cubanitas find the truth before the murderer kills again? 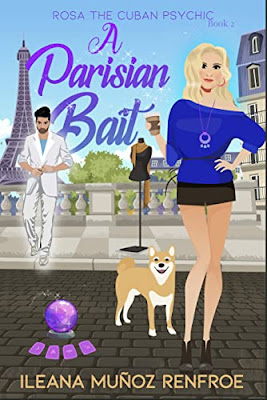 Rosa de Los Reyes and her spirit guide Raul have just arrived in the city of love, Paris.
She is excited to start her one-year fashion internship at The House of Mather. But before she even has a chance to meet her new classmates she is thrust into a murder mystery.
Will Cuban Rosa and Raul be able to solve this misleading smoke-screen? 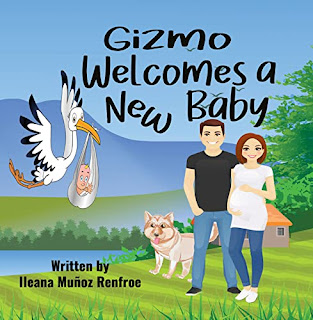 Join Gizmo, the family Shiba Inu, and the stork and new baby as they make their way to their new home. Along the way, they will be greeted by several animals all helping them reach their final destination.