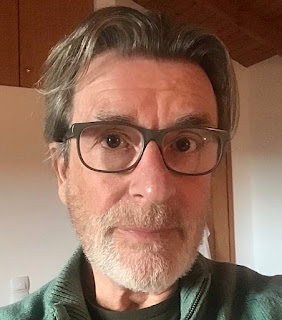 Alex Dunlevy abandoned a career in finance at the age of forty-nine and spent a few years staring at the Mediterranean, contemplating life and loss. Finally, he accepted what his heart had always known. So, he joined a local writing group and he began to write.

He has now completed two novels in a series of intelligent crime thrillers set on the island of Crete and featuring British protagonist Nick Fisher. The Unforgiving Stone was the well-received debut, awarded 5 stars by 65% of its Amazon reviewers (overall average 4.6) and earning a B.R.A.G medallion in the USA. Beneath the Stone is the second in this series.

Alex has also published a collection of short stories, The Late Shift Specialist. These are quite different from his crime writing. Uniquely personal - and quirky, funny or sad - they are written straight from the heart.

Simultaneously, he has been working on other ideas including a black comedy set in the world of corporate finance and a bitter-sweet, coming-of-age story set in the 1960s.

Born in Derbyshire, Alex now divides his time between Wiltshire, England and Crete, Greece, where he has an old, stone house in the central south of the island, between the Amari Valley and the Libyan Sea. 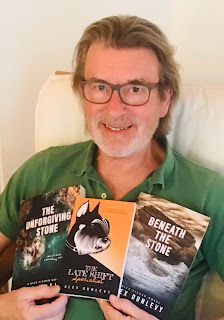 If you would like to get in touch with Alex, please visit his website: www.alexdunlevy.com where you can register for his newsletters, if you wish, listen to him read, and find out more about his writing. Alternatively, just drop an email to: alexdunlevyauthor@gmail.com

Strengths as an Author

Readable and engaging; readers find my books easy to read and hard to put down

I try to write every weekday and to write 1,500 words, however long that takes. On the rare occasions when it takes less than four hours, I carry on until the four hours are up. On occasion, I have written well over two thousand words in that time. I normally start at ten and write till two or later. A carrot and stick approach works best for me. I live in Crete much of the time, so I can promise myself a trip to the beach once I’ve done my work. I will write at weekends, too, if I get behind. For any book, I have a day-by-day, week-by-week programme through to launch. This isn’t set in stone but is only changed with great reluctance and much guilt (even though it’s only for me!)

I would like to have extended the Nick Fisher (series of crime thrillers set in Crete) to at least five novels, but I would also like to have written at least two novels in different genres. I have solid ideas for these and have already written 50k words of one of them. One is to be a black comedy set in the world of corporate finance and the other a bitter-sweet, coming-of-age story based around a European tour in 1964. I also enjoy writing short stories, even though they are a tough sell, and would like to release a second collection. If I achieve all this, I will have nine books published, five years from now. In my dreams, one or more of these would have been picked up by a mainstream publisher or spotted by a TV or film producer!

If you want to write, start writing. Don’t read zillions of books on how to write, just a few of the best ones, and don’t attend endless courses, webinars and so on, just a few of the best to get you started. Most of all, don’t wait for inspiration. For most of us, that doesn’t exist. It’s a job, hopefully one you will enjoy now that you’ve chosen it. It might be a second job, or you might be lucky enough for it to be your only job, but that’s what it is. You need to treat it as such. Put it first. No excuses. Get up in time. Do the hours. Work at it. You will get better. And don’t hide in your garret all the time. It’s important (even if uncomfortable) to share your work, seek and give feedback, so you must join a local writing group. Take their criticisms on board but decide for yourself how (or whether) to deal with those issues.

"I love crime thrillers, but this one was so beautifully written, and it really moved me."

I am working on the third Nick Fisher novel, which I hope to publish early in 2022. So far, I have written 46k words. The working title is The Stone Skimmer. It is set in Crete, but northern Greece and Turkey are also featured. I am aiming for an exciting thriller that includes some emotional passages and explores some major issues and moral dilemmas, the grey areas between right and wrong. 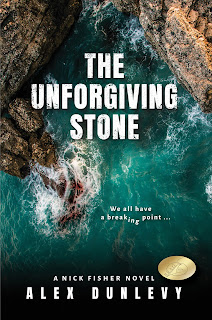 We all have a breaking point…

Nick Fisher and his son have not spoken for years.

But, when the boy brings the girl he is about to marry to the island of Crete, Nick is persuaded to travel to the remote south-west coast, seeking a reconciliation.

Instead, he discovers that a body has been found on the beach. His son has disappeared and is now prime suspect in a murder case.

In a race against time, ex-cop Nick must call upon his old skills and instincts to find his son, then convince the Greek police of his innocence. To do that, he must seek out other suspects and track down the one who was driven to kill. The one who reached their breaking point.

Only success can save his son. It might even restore Nick’s own self-belief. 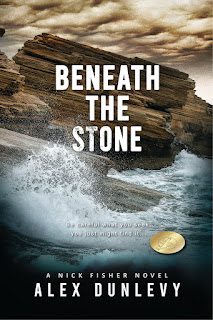 Be careful what you seek;

A missing person case morphs into a grisly murder when a body part is found in the sea. But who would carve up the body and why? Were they the killers or was it that mysterious, hooded man, if he even exists? And why does the tracker dog lead them to a stone wall?

In a dark village with a tortured past where resentment festers, Nick and Náni must work together, despite their differences, to peel back layers of complex relationships, some leading back to wartime Crete.

Only then will they find out why a young man had to die.