Fantasy author Tahani Nelson tells us about the Faoii Chronicles

Get your warpaint on, readers! 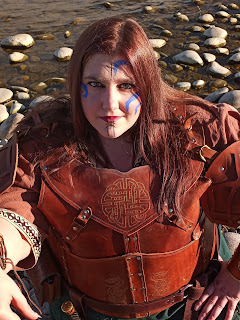 Tahani Nelson is an author and English teacher in Billings, Montana. With hundreds of 5-star reviews and an ever-growing army of Faoii at her back, Nelson has become a common attendee at author events, Renaissance festivals, news programs, and conventions across the US-- always wearing full armor and a face resplendent with warpaint. While her most notable appearances have been at the Indie Audiobook Awards and Fantasycon discussion panels, she most frequently gives presentations about empowerment and creating strong, healthy female role models in modern media.

Before. I usually have some control over the plot of a story, but not so much with my characters. They come to be fully fleshed out and usually in armor, much like Athena from Zeus's head in Greek mythology. So I build my worlds and my plot around my characters, and much of the plot is driven by how they react. It really makes the story much more character-driven, though it is often annoying when they don't behave the way I expect. That probably sounds ridiculous, but a lot of authors have the same issue: sometimes your characters just don't do what you want them to. So you're forced to adapt. Honestly, I don't think I'd want it any other way.

Much like my protagonists, my villains also seem like real, fully-developed people from the moment I start writing them, and they are as flawed and faceted as we are. All of my villains see themselves as the heroes (or did in the beginning),  and their backstories make them real and relatable. I usually try to sprinkle in their backstory throughout the story for the benefit of the reader, and that's made some of the storylines much more nuanced and gritty. I enjoy writing books with shades of gray.

Often, yes. I prefer reading and writing fantasy, so the idea of heroes and destinies and magic are easier to write than other genres, and it doesn't take a lot to immerse myself in those worlds. I also enjoy reading horror, though it's not something that I like writing as much. If I read a horror book I usually have to take a couple of days off before I go back to writing my own novels, or the two genres bleed together too much and it feels much less like my regular writing, as the story suddenly gets darker or hopeless. My alpha readers can usually  tell when this happens, and they'll make suggestions pushing me back towards my own, recognizable style. I might try my hand at horror in the future, though, after this fantasy series is finished.

I started writing the Faoii Chronicles because there were so many heroines that young me looked for and couldn't find enough of. I like writing women that lead armies and wear functional armor and whose goals and dreams don't change when a man suddenly entered the picture. I want to explore the worlds and ideas of classic fantasy, but with less of the character tropes the genre has become known for, and more diversity in the storylines. Fantasy is supposed to be an escape where anything is possible, so I've never understood why it's always looked the same. It's an honor to build on the foundations of those who came before me.

Currently, I'm finishing up the last novel in the Faoii Chronicles. Faoii Ascended takes a hard look at the aftermath and political fallout from the first two books while also introducing a much larger and more frightening enemy that has been lurking behind the scenes for the entire series. It should be an amazing and powerful end to the saga.

There's a lot of research that comes with writing female-led military fantasy. I wrote an entire language to reflect my matriarchal society and then only used six words. Sometimes I have to do in-depth research on siege weaponry or how to construct fortifications in different environments. Sometimes magic plays an important role in a scene and I have to learn about thermodynamics to describe it correctly. I've done a lot of research on matriarchal societies, myths, and belief systems to create the Faoii, and I'm constantly learning new things. I know the world is mine and I can do basically anything I want with it, but I want it to feel real, and like there's an entire society and history behind the people you meet in the chapters. That takes a lot of research and world building that doesn't explicitly make its way into the books themselves. 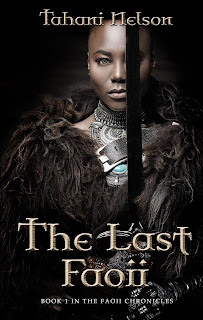 The Faoii have protected Clearwall with both magic and blade for generations. But when her monastery is attacked and her sisters slaughtered, only young Kaiya is left alive.

Forced to cope without the traditions of her Order, Kaiya travels the country on a mission to avenge her sisters and preserve her heritage. The search brings her not only to dark discoveries and ancient family secrets, but also to something she never wanted or dreamed of: an estranged brother.

Thrust into a war at the heart of a broken empire, the siblings face a dark past and darker future while Kaiya learns the true state of the world outside her monastery's walls, the true threat of the army seeping across the land, and her own innate abilities as the last of her kind. 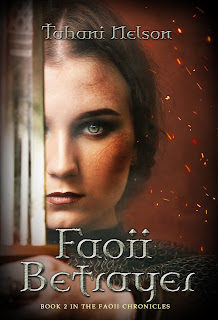 Ilahna Harkins will do whatever it takes to save her brother.

Two centuries after the Godfell War, Ilahna knows that the only way to survive in Clearwall is to be faster and smarter than everyone else. She stays on her toes, steals what she needs... and never EVER mentions magic.
Because magic is the way of the Faoii, and witches get burned in Clearwall.
Being silent isn't always enough, though, and when her brother starts manifesting mysterious powers, Ilahna knows they don't have much time.
Hunted across Clearwall, the siblings must unbury a lifetime's worth of lies and secrets with the help of unlikely allies...or find themselves lashed to the pyre like all the Faoii that came before.