Announcing Charlotte Gray, the second book in the Those Regency Belles series by Vicki Chatham 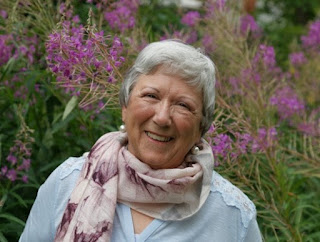 Victoria Chatham’s tag line History, Mystery, and Love says it all. She is a history buff, especially of the Regency era, adds a little mystery into her novels and seals them with a loving happy ever after ending. She meets with her writing buddies as often as possible but when not writing enjoys the great outdoors, especially if it includes playing around with dogs or horses. She lives near Calgary, Alberta, Canada.

I retired from the workforce several years ago and appreciate the freedom from having to get up to the sound of an alarm clock. I love dogs, and because it was no longer practical to have my own, I started house and pet sitting. I have several clients and care for various dogs, from an elderly and quite grumpy Yorkshire terrier to a young mixed breed with bags of energy. I can write wherever I go once I have the dogs’ routines figured out, but do not take my laptop on holiday with me. That is nearly a complete break, although I often use the places I’ve visited for settings in my books. I take loads of photos, too, although I’m more of a point-and-shoot kind of gal rather than a real photographer. I enjoy the movies, too, and am just beginning to feel comfortable going to the cinema again rather than watching them on Netflix. I’m also thinking of trying my hand at mixed media art, but I will save that for a winter project.

Not yet, although it is in the works. It will be a contemporary western romance I’ve been toying with for the last six months. Although most of my books are historical romances or historical fiction, I like being able to switch genres. When I wrote the first contemporary, I mistakenly thought I wouldn’t need to do so much research, but that didn’t happen. I found I needed to do almost as much to write accurately about steer wrestling and ranch life, about which I knew very little. No one has called me out on it, so I guess I got it right.

That had to be Charlotte Gray, the second book in my series Those Regency Belles. It may seem odd to non-writers when they hear writers talk about fighting with their characters, but Charlotte did not want the story or the life I planned for her. In the original plot, Charlotte was an orphan who, like so many young ladies of that era, had no future other than getting married, becoming a governess or lady’s companion, and going into prostitution or the workhouse. Original Charlotte became a lady’s companion and lived a quiet life in the country, mooning after her employer’s nephew each time he visited. Charlotte wanted more, so I gave it to her. Not only did she have the action she demanded but landed herself a dashing hero.

I read a lot. I also watch movies and YouTube, which is a fantastic resource. Wanting to know what life on a ship would have been like for passengers, I watched To the Ends of the Earth, a three-part BBC TV miniseries starring Benedict Cumberbatch about a voyage to Australia in 1812. I also appreciate virtual tours of the great houses of England, frequently stopping the video to catch details that may or may not finish up in my narrative. I use Mr. Google, but that is usually a starting point, not the be-all and end-all. As a tactile person, I like to see and hear things for myself whenever I can. One of my most poignant moments came at the Imperial War Museum in London, England, reading an actual letter from a soldier in France during WW1 while researching my book Shell Shocked.

Georgette Heyer was my inspiration to write Regency romance, but I later enjoyed Mary Balogh’s Regency romances just as much. Although I read a lot in my genre, I also thoroughly enjoy a good thriller. I’ve been a Jack Reacher fan for years and have recently started reading the Longmire books as I enjoyed the TV series so much. Anthony Horowitz is another author I enjoy reading. He also wrote the TV series Foyle’s War and contributed scripts to the Poirot and Midsomer Murders TV series.

That would be my late husband, bless him. My family never saw my writing as a serious career, rather a little hobby, although I think they are proud of my achievements now. When I started talking about how much I wanted to write and would when I retired, Nitch (a nickname—only his family called him Neil) signed me up for short story writing classes and then entered me in a short story competition in which I placed fourth and won $100. He did the shopping, cooking, and cleaning so that I could write. His only reward, he said, was to have a red Ferrari and an eighteen-year-old blonde chauffeur when I made it to the New York Times bestseller list, which hasn’t happened yet. I agreed to the car but not the chauffeur. Can you imagine what the insurance would have been? He’s been gone twenty-one years now. During that time, my writing tribe has gone on to support and encourage me every step of the way. 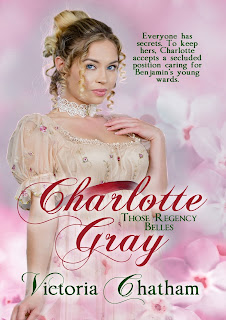 Charlotte Gray discovers her home ransacked, her father missing, and a dark and dangerous stranger, Benjamin Abernathy, waiting for her. He had promised to take care of his friend’s daughter if anything befell him and must now follow through with that promise.

With no other options, and despite her misgivings, Charlotte becomes established in the stranger’s home as governess to his nephew and niece. Benjamin doubts her ability to cope with the two young hellions but is quickly reassured as he recognizes the sharp mind behind her blue eyes. But is it Charlotte’s mind he falls in love with, or her delectable body?

Charlotte is hunted for the knowledge she is suspected of possessing and Benjamin for the threat he presents. Will the smugglers and spies behind the threat have any chance against this duo who will go to any lengths to protect the secrets they each must keep? 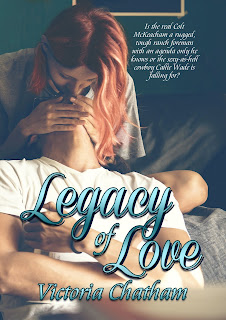 Callie Wade: Some would call her a successful businesswoman. Colt McKeacham must call this knockout redhead his boss.

Colt McKeacham: Some see him as a rugged, tough ranch foreman. Callie sees a sexy-as-hell cowboy with an attitude. How can she resist him?

Callie Wad almost inherits a ranch from a grandfather she never knew she had. The last stipulation in his will that she marry the ranch foreman, Colt McKeacham, within six months leaves her reeling. When Callie visits the ranch and suffers a series of accidents, Colt sees a disturbingly familiar pattern and suspects that her grandfather’s death was not what it appeared. Who is deliberately trying to drive Callie away, or worse? Despite their growing attraction, Callie has her suspicions that Colt wants the ranch more than he wants her. The truth stuns them both.