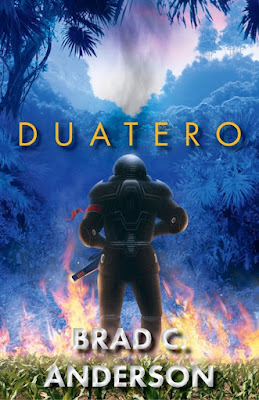 Duatero by Vancouver author Brad C. Anderson, a searing far-future science fiction novel about the struggles of an abandoned human colony to survive on a hostile alien world, is back in print in a new edition from Shadowpaw Press after being orphaned by the closing of its original publisher, Bundoran Press.

Duatero is being released under the Shadowpaw Press Reprise imprint, which focuses on producing new editions of notable, previously published work.

“I am thrilled that Shadowpaw Press has given my book a new life and audience,” Anderson said. “It has been great working with someone passionate about books and who wants to put them in readers’ hands.”

“Duatero is a powerful work of science fiction that confronts issues of morality and survival head-on in a carefully thought-out and terrifying alien world,” said Edward Willett, editor and publisher of Shadowpaw Press. “It deserves to find many new readers, and I’m thrilled to be able to give it that opportunity.”

Duatero can be bought directly from the publisher or from most online bookstores in both ebook and print and can also be ordered through any brick-and-mortar bookstore. This handy URL provides links to multiple online sources:  https://books2read.com/duatero/

More about the book

Majstro Falchilo Kredo has devoted his life to protecting the abandoned Earth colony of Duatero from Malamiko, the indigenous ecosystem that makes their crops fail and whose contamination turns humans into mindless monsters.

But Malimiko is changing, becoming more dangerous, more aware, even as the ancient technology the humans use to combat it fails piece by precious piece. Kredo and his fellow soldiers must risk everything or see all they hold precious wiped away and forgotten.

Kredo is prepared to sacrifice himself—and anyone around him—to do his duty. But what if the price demanded is even higher?

“Combines power armoured soldiers from the pages of sci-fi pulps, a world as intriguing yet bleak as Mid-World from Stephen King’s Dark Tower, and an evil as terrifying and paranoia-inducing as John Carpenter’s The Thing. A descent into the darkness of a failing world and the brutal zealotry of its defenders.” - Matt Moore, Aurora Award-winning author of It’s Not the End and Other Lies

Brad C. Anderson lives with his wife and puppy in Vancouver, Canada. He teaches undergraduate business courses at a local university and researches organizational wisdom in blithe defiance of the fact most people do not think you can put those two words in the same sentence without irony. Previously, he worked in the biotech sector, where he made drugs for a living (legally!). His stories have appeared in a variety of publications. His short story “Naïve Gods” was longlisted for a 2017 Sunburst Award for Excellence in Canadian Literature of the Fantastic. It was published in the anthology Lazarus Risen, which was itself nominated for an Aurora Award.