How a Blind Boy and a Puppy Grew Up, Became Best Friends, and Together Survived One of America's Darkest Days

A dedication like no other between a Man and his Dog as told by New York Times Bestseller, Michael Hingson

The book is available worldwide in digital and print format 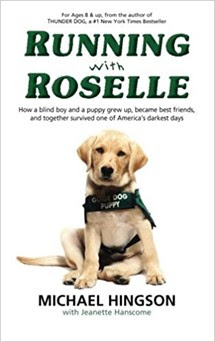 A puppy who became a true American hero. The blind boy who let nothing stop him. When they finally grew up and met, it was magic. On September 11, 2001, a blind man escaped the World Trade Center by walking down 78 flights of stairs with his guide dog. Days later, America fell in love with Mike and Roselle, and the special bond that helped them survive. Mike shared his story in the New York Times bestselling book, Thunder Dog. Now, in Running With Roselle, kids can follow Roselle as she grows from an energetic yellow Lab prone to stealing her puppy raiser’s slippers to a confident guide dog who passes the ultimate test when her partner needs her most. Meet Mike, a boy blind from birth who excels in public school, shocks the neighbors by riding his bicycle through the streets of Palmdale, CA, drives a car around his college campus, and uses his relationship of trust and teamwork with Roselle to help others on a day that changed America forever.

Amazon.com:  Running With Roselle: How a Blind Boy and a Puppy Grew Up, Became Best Friends, and Together Survived One of America's Darkest Days: Michael Hingson, Jeanette Hanscome: 9780615905235: Amazon.com: Books 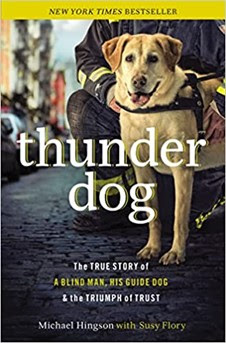 An instant New York Times bestseller, Thunder Dog tells the true story of a blind man, his guide dog, and the life-changing power of faith and trust in the face of terror.

When one of four hijacked planes flew into the World Trade Center's North Tower on September 11, 2001, Michael Hingson, a district sales manager for a data protection and network security systems company, was sitting down for a meeting. His guide dog, Roselle, was at his feet.

Blind from birth, Michael could hear the sounds of shattering glass, falling debris, and terrified people flooding all around him. But Roselle sat calmly beside him. In that moment, Michael chose to trust Roselle's judgment and not to panic. They were a team.

As you relive that fateful day in September 2001 alongside Michael and Roselle, you'll learn:

·        can inspire your own unshakeable faith

"Chapter by chapter of this intriguing work will keep you spellbound. Thunder Dog celebrates the power of the human and animal bond. We all can learn life lessons from this incredible story."--Larry King, Emmy award-winning broadcaster and longtime host of Larry King Live Michael Hingson wrote the runaway bestseller, Thunder Dog: The True Story of a Blind Man, His Guide Dog, and the Triumph of Trust at Ground Zero. He lives on the water in Novato, California with his wife, Karen, his guide dog, Africa, and Africa's mother Fantasia. When he isn't traveling the world with Africa speaking and teaching, he enjoys playing with his dogs, cooking, and helping Karen with her quilting business. Mike's favorite things include Harry Potter books, nachos with cheese only, talking with people on his ham radio set, and listening to vintage radio shows. Visit Mike's website: michaelhingson.com.

To request additional review copies or an interview with Michael Hingson, please contact Mickey Mikkelson at Creative Edge Publicity: mickey.creativeedge@gmail.com / 403.464.6925.    We look forward to the coverage!